It's not just a strong TV presence that Sky have invested in because they've also created a dedicated Twitter page for all things related to the GAA.

Earlier this week, Sky Sports News presenter Clare  Tomlinson apologised for her All-Ireland Final gaffe and following this, Sky's social media team decided to have some tongue-in-cheek fun with these five tweets.

Con-nuck side Cheshire and defending champions London will fight it out again after a 0-15 to 2-09 draw last Sunday. 2/5

All-England rules resulted in London leading by five points at half-time, despite Mayo scoring 2-5 to London’s 0-4. 3/5

We will be live with a minute-by-minute blog from 3.30pm on the Saturday and the game will be live on Sky Sports HD (Channel TBC). 5/5

Some people were initially confused by the tweets and felt that the account was hacked but any uncertainty was quickly cleared up. The rascals. 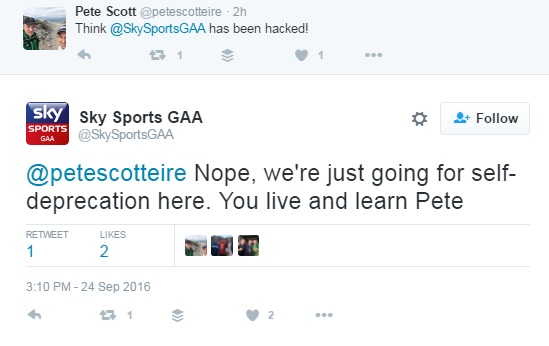 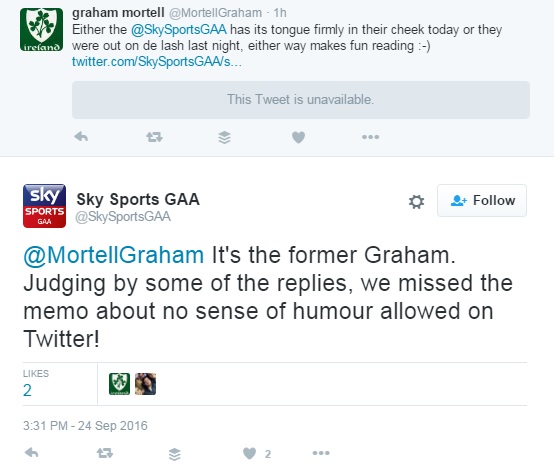 popular
Amazon Prime Video has quietly added 18 big releases to its library
David Jason says he wants to play Del Boy in Only Fools And Horses again
Confirmation on lifting of restrictions for pubs and events expected this week
Here's where all the 149 tickets that won €36,687 in Saturday's Lotto were sold
That Nic Cage film everyone is talking about is finally available to watch at home
QUIZ: Can you name all the US states with a smaller population than Ireland?
Put the pedal to the metal with this General Knowledge Quiz
You may also like
3 months ago
Wicklow GAA to investigate fight after Under 15 match on Saturday
1 year ago
Post-match celebrations and a lack of social distancing at certain events put club game on hold
1 year ago
Cork GAA pleads with clubs and supporters “not to engage in celebrations that breach current guidelines”
1 year ago
What's the Bronco test and why it may come up in conversation this week
1 year ago
The Andy Moran GAA Isolation Workout
1 year ago
SuperValu, Centra and the GAA team up on initiative to support elderly people
Next Page