Top 10 best plays in the Super Bowl ever

Brought to you by Tabasco® brand Original Red Sauce.

Things are heating up ahead of Sunday night's Super Bowl LI!

Sunday night will see Atlanta Falcons chase their first Super Bowl against New England Patriots in Houston. It's guaranteed to produce some action on the night but it got us thinking about the best moments from this famous sporting showcase.

Not everyone will agree, but here are our best 10 plays in Super Bowl history!

When it comes to moments of butt-clenching tension in sport, the final seconds of Super Bowl XXXIV is well up there. LA Rams were leading 23-16 with six seconds to play when St Louis Titans made one last bid for glory.

Titans quarterback Steve McNair found receiver Kevin Dyson but he was hauled down just short of the line by linebacker Mike Jones. This defining moment is simply referred to as “The Tackle” in NFL folklore.

William “Refrigerator” Perry was a legend in his own lifetime, a 350-pound monster who was once described as the “best use of fat since the invention of bacon.” Everyone loved the Fridge.

His touchdown for Chicago Bears against New England Patriots came about after he was drafted in as an offensive battering ram. The Patriots were powerless to stop the big man's bulldozing touchdown and he certainly enjoyed the moment!

NY Giants’ quarterback Eli Manning combined with wide receiver David Tyree to make this miraculous play, which happened on a drive to the game-winning touchdown.

Manning somehow evaded New England Patriots' defence when he really had no right to. His pass found Tyree, who soared into the air before using his helmet to make one of the best catches of all time.

With the game tied at 3rd and six, Elway switched off his basic survival instincts to chase a first down with a dive for distance. Inevitably, he got mangled by two defenders and spun into the history books with his resulting impression of a helicopter. Ouch!

LA Raiders running back Marcus Allen produced one of the most memorable moments in Super Bowl history with his incredible 74-yard run and touchdown against Washington Redskins.

He initially ran into a dead end before engaging reverse and going on a charmed, mazy run through the opposition ranks. He looked like a man among boys as the opposition could only watch him create this highlight reel moment.

San Francisco 49ers' meeting with Cincinnati Bengals was one of the most dramatic Super Bowls ever but one move stands out from the game. Joe Montana had dragged the 49ers from their own eight yard line to Bengals' 10-yard line, with just 39 seconds left on the clock and Bengals leading 16-13.

The legendary quarterback then found receiver John Taylor in the end zone. His drilled pass would secure their place in history and seal the victory.

Seattle Seahawks Jermaine Kearse defied the odds with this catch against New England Patriots. The ball bobbled and bounced off his hand, his knee, his leg and his hand again before he secured possession with some of the best juggling ever seen in a Super Bowl.

Now this is how you do an interception! Pittsburgh Steeler's linebacker James Harrison picked off a short pass to Arizona Cardinals’ Anquan Boldin before going on a lungbusting 100-yard run to score a touchdown. It was a remarkable reversal that gave Steelers the momentum they needed to win.

Pittsburgh wide receiver Steelers’ Santonio Holmes pulled off arguably the greatest Super Bowl winning catch against Arizona Cardinals with 34 seconds remaining. He had no right to make that gravity-defying catch from the corner of the end zone.

It was the finest of margins but Holmes somehow plucked the ball out of the air and dug his toes in to claim the vital touchdown.

What could go wrong? Well, Indianapolis Colts soon found out when they kicked the ball to Chicago Bears’ young return specialist, Devin Hester. The rookie engaged the afterburners and ran 92 yards to score the first punt return in a Super Bowl.

It’s the sort of fairytale move that usually only happens in people’s dreams or exaggerated Hollywood films.

Gluten free, with zero calories and less sodium than other pepper sauces, Original Red is sold in over 180 countries and territories worldwide. For recipes, check out their website. 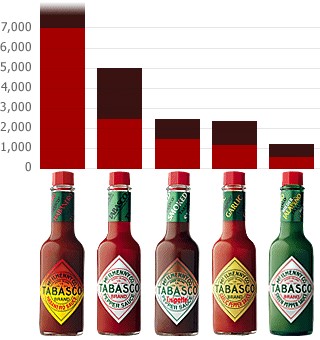 Brought to you by Tabasco® brand Original Red Sauce.

popular
Lidl to launch its second 'reverse vending machine' in Ireland next week
Husband of school teacher killed in Texas shooting dies of heart attack
The 2 Johnnies share unbelievable catfish ordeal affecting over 40 people
Acclaimed actor Ray Liotta has died, aged 67
QUIZ: How well do you know these famous flights in movies and shows?
The 50 most iconic songs of all time* have been revealed
Two excellent crime thrillers are among the movies on TV tonight
You may also like
13 hours ago
The Flight Attendant Season Two is just as funny, smart and mysterious as the first season
1 day ago
Buying or building your first home? This FREE virtual event is perfect for you
1 day ago
Watch out! A new BBQ range is coming your way and it's about to get fiery
1 week ago
The new version of The Time Traveler's Wife is going to give you all of the feels
1 week ago
The Ultimate Ghostbusters Quiz
2 weeks ago
Madrí Excepcional want to kickstart your summer by giving you a FREE pint!
Next Page