In the last few days, the incredibly unnecessary and horrendously OTT coverage of Raheem Sterling's latest tattoo has been a very unwelcome sight.

Since the ridiculous 'controversy' spread, the Manchester City and England player has even explained his decision to get an assault rifle tattooed on his leg. 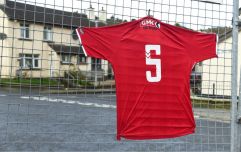 END_OF_DOCUMENT_TOKEN_TO_BE_REPLACED

Sterling said: "When I was two, my father died from being gunned down to death. I made a promise to myself. I would never touch a gun in my lifetime. I shoot with my right foot so it has a deeper meaning."

Despite this succinct and definitive stance, certain people are still trying to make an issue out of this.

In the aftermath of this stupid 'controversy,' a TV presenter that has been featured on Sky Atlantic and Sky News has weighed in on the issue and tried to brand James McClean's tattoo of the Free Derry Corner as one that is 'terrorist supporting'.

Here's what Phil Campion had to say.

Nothing to say about James McClean (West Brom) and his terrorist supporting tat then. Absolute disgrace, should have been banned from the sport. pic.twitter.com/mxa2ByfZOC

As many of you will know, Free Derry Corner is a historical landmark that's a cornerstone of the culture, identity and history of Derry and its citizens. 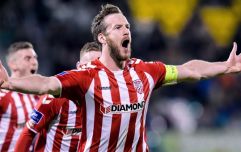 END_OF_DOCUMENT_TOKEN_TO_BE_REPLACED

Free Derry Corner is in NO WAY a terrorist-supporting message. That's abundantly clear.

In the present era, Free Derry Corner is the personification of the idea that the people of Derry, regardless of political persuasion, are exactly that. Free to make their own choices. Free to support their own beliefs. Free to pursue a life of happiness for them and their families. Free to make peace with the past and work towards a brighter future. Free to critique the woefully incorrect opinion of a TV presenter. Free to defend one of their most famous sons, James McClean.

On that note, 'Big Phil' is free to express his opinion, as are these people, who didn't take too kindly to the initial tweet...

You aren't very intelligent Philip are you? In what way is a world famous landmark and the national flag of a country 'terrorist supporting'?

Great looking tattoo , he is a proud Irish man who knows his city’s history

Totally disagree with you. He is entitled to his political views the fact you don't like them means the problem is with you not him

The Big Reviewski || JOE · The Big Reviewski with Y: The Last Man, that Malignant ending & a secret streaming service
popular
The 50 most iconic songs of all time* have been revealed
One of the better Liam Neeson action romps is among the movies on TV tonight
The five "best places to live" in Ireland have been revealed
PICS: The man with the biggest penis in the world has one unbelievable problem with it
The JOE Friday Pub Quiz: Week 261
QUIZ: Flex your brain definition with this general knowledge quiz
People think they've figured out the ranking of the viewers on your Instagram Stories
You may also like
1 day ago
Two men charged with the murder of journalist Lyra McKee
1 month ago
Appeal for information as man attacked with strimmer in Derry
5 months ago
"Deep concern" as burning car abandoned on train track in Northern Ireland
11 months ago
61-year-old woman in critical condition following shooting in Derry
1 year ago
This new Irish song is the lockdown 'LOVE' you need right now
1 year ago
It's March 20 and it's just like every other day in Northern Ireland
Next Page