TWEET: Piers Morgan has managed to suck some of the joy from Dan Carter's phenomenal performance

One of the greatest No 10's in rugby history finally had a stage to show his immense talent and Dan Carter didn't disappoint. New Zealand have retained the Webb Ellis trophy following an enthralling 34-17 win at Twickenham and Carter was pulling the strings.

The fly-half was phenomenal from the boot, scoring 2 conversions, 4 penalties and 1 drop goal as the All Blacks were crowned world champions for a record third time.

END_OF_DOCUMENT_TOKEN_TO_BE_REPLACED

Very few people could begrudge the Crusaders star his moment of glory, he cruelly missed out on the final against France four years ago due to injury, but after the match ended, Piers Morgan couldn't help but shamelessly plug the fact that Carter follows him on Twitter.

While I'm sure the tweet was meant in jest, it still strikes me as incredibly cringeworthy and shameless.

Dan Carter follows me on Twitter. In case you're wondering where he gets his inspiration. #RWCFinal

It seems that quite a few people on Twitter were under the same impression, that the TV host was shamelessly piggybacking on the success of the World Cup winner, and they were all quick to reply. 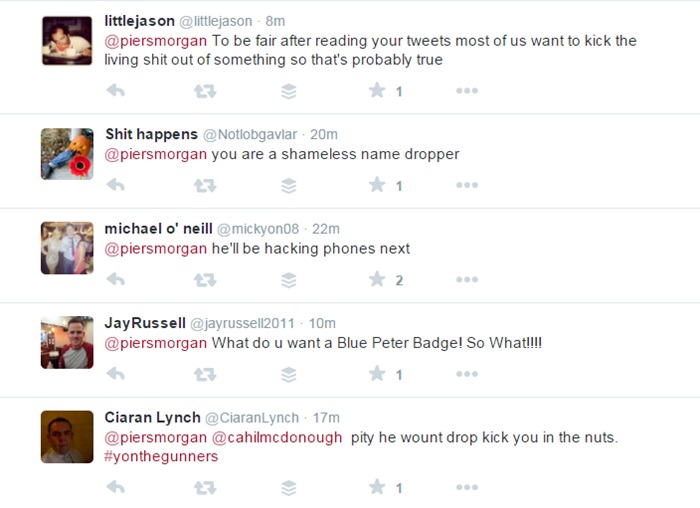 popular
New car-free town with population of 85,000 set to be built in Dublin
Here's how to make €9-11 on Revolut in just a few minutes
Galway City Council street cleaners claim Lotto jackpot worth over €5.5 million
Elderly Irish man stabbed to death on mobility scooter in London
QUIZ: Can you name all the countries beginning with A?
Articulated lorry driver in his 20s dies in Tyrone
A terrific '90s crime drama is among the movies on TV tonight
You may also like
4 months ago
Scottish Parliament official dies during rugby game in Dublin
5 months ago
Every Guinness fan needs to try these brand new experimental beers
6 months ago
"Samaritans saved my life" - Brent Pope praised for honest interview on Tommy Tiernan Show
1 year ago
Craig Casey and Johnny Sexton combination backed for Italy clash
1 year ago
Defence grows for Billy Burns after one of the roughest days of his rugby career
1 year ago
Major upside to Ireland's Six Nations challenge that should make all the difference
Next Page