TWEETS: Ireland ran over Italy in the Six Nations today and here's the reaction

It was never really in doubt after a great first half showing...

Ireland overcame Italy in the Aviva Stadium today in a result which will go some way towards alleviating the negativity surrounding Ireland's 2016 Six Nations.

Tries from... well a lot of Irish players paved the way for a comprehensive 58-15 victory over a pretty poor Italian side. 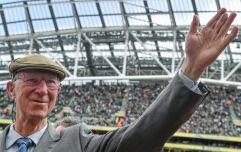 Growing up in the shadow of Jack Charlton's Ireland

END_OF_DOCUMENT_TOKEN_TO_BE_REPLACED

There's lots of reasons to be cheerful about the performance which showed a far more accurate execution from the players. A number of young players came on and impressed including Connacht's Ultan Dillane and Finlay Bealham.

Let's hope they can carry on and produce a similar performance in their last game against Scotland.

But for now, we'll focus on the aftermath of the Italian contest and how people reacted to the good result.

Finlay Bealham on for his Ireland debut.

Joe Schmidt must be feeling so smug right now.#IREvITA #RBS6Nations

Conor O'Shea sitting in the corner of a room, rocking back and forth

We had to get over 50 in this game. That's the truth of it. We needed a bit of a lift. #IREvITA

Early score. Job well and truly done. No excuse now not to bring on the likes of Dillane, Marmion, Bealham etc.

Could be a record Connacht representation on this team any time soon; Finlay bealham will be the fifth one on the field imminently..

popular
What the hell is 'Stomp and Holler', and why does Spotify insist that you love it?
Elliot Page – Inception and Juno star announces he is transgender
Sale of luxury castle in Kerry, described as "one of Ireland’s best kept secrets”, completed for €4.5 million
WWE Hall of Famer Pat Patterson has died, aged 79
28 individuals identified as being participants in Pandemic Unemployment Payment fraud
AIB to cut 1,500 jobs and close several Irish branches as part of cost-cutting measures
Over 300 Ford cars recalled in Ireland over battery issue that could lead to vehicle fire
You may also like
3 weeks ago
QUIZ: Can you identify these Irish towns on a map?
3 weeks ago
QUIZ: Can you name all the US states with a smaller population than Ireland?
1 month ago
Three Status Yellow weather warnings issued, affecting eight counties
1 month ago
7 gazebos from €40 to €12,000 for your outdoor entertaining
2 months ago
396 new cases of Covid-19, 9 people admitted to hospital in last 24 hours
2 months ago
QUIZ: Can you name all 32 counties in Ireland in under 4 minutes?
Next Page