VIDEO: Absolutely amazing footage of a man paragliding around the Northern Lights

The is truly stunning.

It is hard to be awed by what you see on the internet these days, but this clip really did take us aback.

Mashable has posted Red Bull's incredible video of Spanish paraglider Horacio Llorens flying in and around the Norther Lights in Tromsø in Norway. 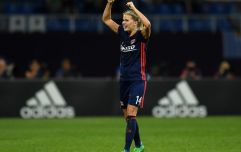 END_OF_DOCUMENT_TOKEN_TO_BE_REPLACED

Even the music used here is beautiful, but the unforgettable journey came at a risk for Llorens, who had to combat temperatures of -15 degrees by wearing battery-heated gloves and a wetsuit.

Adding to the fact that he's Spanish, the freezing conditions made it even more challenging for Horacio, who described the experience as "hardcore".

Take just a minute out to look a this, because it's unreal.

Watch this breathtaking footage of a paraglider floating amid the Northern Lights: https://t.co/5syz0TEpjZ https://t.co/Uc2rgS1Aq8

popular
QUIZ: Only the brightest will conquer this tricky General Knowledge Quiz
The JOE Music Quiz: Week 123
The JOE Friday Pub Quiz: Week 314
QUIZ: How well do you know The Mighty Ducks?
“Megaproject” MetroLink takes next step towards construction
QUIZ: Step on up and conquer this tricky General Knowledge Quiz
An incredible Western crime drama is among the movies on TV tonight
You may also like
3 months ago
Oslo Pride events cancelled after two killed in Norway shooting
11 months ago
Norway bow-and-arrow attacker handed over to health services
11 months ago
Several people killed during bow and arrow attack in Norway
3 years ago
Norway cruise ship passengers evacuated in rough seas
3 years ago
Netflix’s 22 July is a powerful but important watch
4 years ago
After nearly 100 years, this looks like the beginning of the end for radio as we know it
Next Page