When Red Bull celebrate, they do it in style…

Red Bull wanted to celebrate winning the Formula One Drivers’ and Constructors’ Championships for the fourth consecutive year, so they asked David Coulthard to perform some doughnuts on top of the world’s fourth largest hotel.

END_OF_DOCUMENT_TOKEN_TO_BE_REPLACED

Speaking about the stunt, David said: "When Red Bull first suggested the idea to me I said 'why not?'

"I like getting involved with anything that pushes the boundaries and it's what Red Bull stands for. I think this will produce fantastic, iconic shots in an amazing town and I’m really privileged to be part of it.”

David performed the stunt in an Infiniti Red Bull Racing 750bhp Formula One car, 210 metres above sea level. Here he is having a gander over the side… brave man. 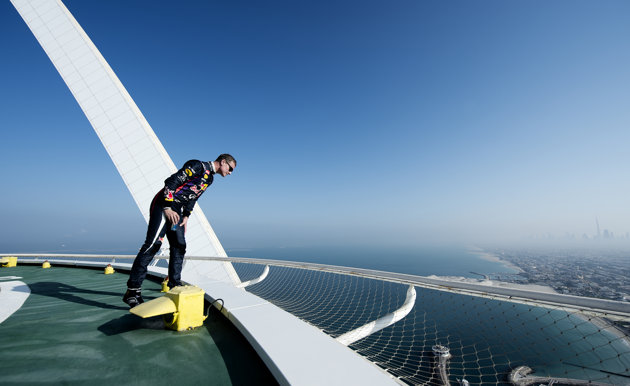 popular
QUIZ: Can you get top marks in this short but tricky Irish geography quiz?
4-year-old girl killed in Sligo caravan park named as Alice Dunleavy
Two long-thought-dead Marvel projects appear to be in the works
Family of Ashling Murphy share heartbreaking tribute at Fleadh Cheoil
QUIZ: Can you name all the counties in Ireland with an ‘N’ in their name?
QUIZ: Can you score 12/15 in this difficult General Knowledge Quiz?
The JOE Friday Pub Quiz: Week 306
You may also like
1 month ago
Bernie Ecclestone says he'd "take a bullet for Putin" in bizarre GMB interview
4 months ago
'Drive to Survive but for bikes' is coming to Netflix
4 months ago
Formula 1 to speak to Drive to Survive producers over "distorting" of rivalries
1 year ago
Season 3 of Drive to Survive coming to Netflix next month
3 years ago
Netflix has a brand new Formula 1 series from the makers of Senna
5 years ago
Bernie Ecclestone "dismissed" as boss of Formula 1
Next Page