VIDEO: The Ireland heroes have arrived home to Dublin Airport

We've never been happier to see them.

Martin O'Neill's men have landed at Dublin Airport, where there is a congregation of Ireland fans gathered to congratulate the team on their spirited performance at Euro 2016.

The lads were knocked out by France yesterday despite a first half performance that befits one of the greatest stages in world football. 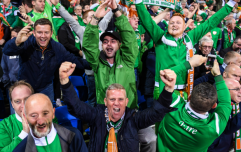 END_OF_DOCUMENT_TOKEN_TO_BE_REPLACED

Videos are starting to emerge on Twitter of the lads arriving at Dublin export, where they have given a press conference and met hundreds of adoring fans.

They were also greeted by Minister for Sport Shane Ross.

Now for the real welcome, with crowds of fans outside @DublinAirport pic.twitter.com/2JGsPuDdq4

Thanks to Peter for sharing this w. us from @DublinAirport where fans await the arrival of the #Irish team! #COYBIG pic.twitter.com/igj8hLjg8v

popular
Peter Kay moved to tears on stage while opening his first stand-up tour in 12 years
Simon Cowell concerns fans with appearance as they 'don't recognise him'
20 years ago, one of the best sci-fi movies of the 21st century was a box-office bomb
Boy, 1, eaten alive by 11-foot crocodile in front of dad on fishing trip
U2 drummer Larry Mullen Jr. says band may perform without him in 2023
Netflix has just added 30 big movies to its library
No, we've never heard of the new "best movie ever made" either
You may also like
6 years ago
VIDEO: Martin O’Neill sets off fire alarm in TV3 studios with a wicked half-volley
6 years ago
WATCH: Eamon Dunphy and Liam Brady’s tribute to Johnny Giles may well move you to tears
6 years ago
WATCH: Robbie Brady celebrating with his family the standout moment in UEFA thank you to Euro 2016 fans
6 years ago
COMMENT: The backlash against Irish football fans and their perceived drinking culture needs to stop
6 years ago
WATCH: Irish fans sing about Robbie Brady's father after meeting him on a bus
6 years ago
PICS: The soundest Irish fan at the Euros has been found and given a great reward
Next Page