Video: JOE meets and beats GOD himself, Robbie Fowler, in a skills challenge

Liverpool legend Robbie Fowler was in Dublin as part of the Carlsberg #JOINTHEGREATS campaign and we caught up with him for a chat and to take him on in a skills challenge.

Robbie plus Jason McAteer and Dietmar Hamann were all on hand to surprise Liverpool fans who were trying to win a complete football experience. The prize being offered by Carlsberg is a VIP trip to Anfield (pic below) for Liverpool's last home game of the season against Newcastle.

Not only that, but giving Irish football fans the once in a lifetime opportunity to play on Liverpool FC’s hallowed Anfield turf with their mates. The day after the Newcastle match the lucky winners get to play at Anfield with a host of Liverpool legends. 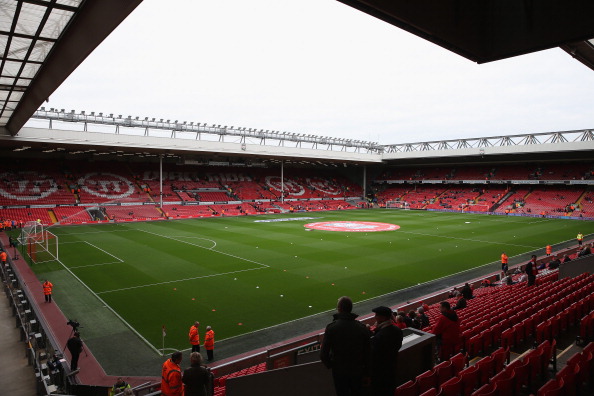 END_OF_DOCUMENT_TOKEN_TO_BE_REPLACED

Three lucky fans, who recounted the best fan stories, were surprised by the ‘Greats’ and challenged to return with three mates each within 90 minutes to take part in a skills challenge on a spectacular purpose-built rooftop football pitch on a city-centre car park, with the prize of a trip to play at Anfield with their mates up for grabs for the winning team.  Each team was captained by a ‘Great’ and the eventual winners landed the first four spots on this ultimate football experience.

Before that all took place, JOE's Eric Lalor caught up with the man referred to as 'God' by the Kop faithful and challenged him to a skills challenge. This is what happened:

popular
Gardaí unveil new Armed Support Unit vehicles to replace older models
Netflix has just added 33 very big movies to its library
The full list of cancelled flights in and out of Dublin Airport on Monday (so far)
One of the greatest crime movies of all time could be getting a sequel
Amazon Prime Video has just added 51 big movies to its library
Increase in passenger charges at Dublin Airport may be on the way
An action-packed thriller is among the movies on TV tonight
You may also like
1 week ago
Gary Lineker says he suffered racist abuse during football days due to "darkish skin"
1 month ago
Merseyside police defend ‘exemplary’ Liverpool fans tear gassed by French police
1 month ago
BBC trainee accidentally posts message mocking Man United live on TV
1 month ago
Kurt Zouma charged with three animal welfare offences
1 month ago
The JOE Friday Pub Quiz: Week 295
1 month ago
Wagatha Christie trial: Rebekah Vardy denies leaking Riyad Mahrez message
Next Page