VIDEO: John Kavanagh talks about the violent incident in Dublin that led him to MMA

John Kavanagh talks about the incident that led him to mixed martial arts, the UFC and Conor McGregor.

Speaking to Ryan Tubridy on Friday night's Late Late Show, John Kavanagh discussed the incident in Rathmines, in Dublin, that led him to carve out a life as the country's most successful coach of mixed martial arts.

"I was in Rathmines, I was 18 at the time and was with my girlfriend. We were with a crowd and got left behind and I saw a guy getting a bit of a pasting," he revealed. 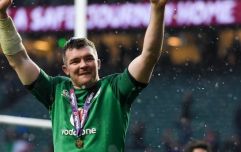 END_OF_DOCUMENT_TOKEN_TO_BE_REPLACED

"What would have been sensible would have been to go into the garda station just across the road, but I wasn't thinking straight and I jumped in. Unfortunately it didn't end like the martial arts movies where you drop three or four guys and you walk off into the sunset.

"I was the one that got dropped."

As well as the physical injuries, Kavanagh spoke about the humiliation he felt at being beaten up in front of his girlfriend at the time. He went through a period of depression, but then described how he managed to change his life.

"There's just a humiliation that goes with, the physical side wasn’t all that bad, but the humiliation of being beaten up in front of your girlfriend.

"I grew up watching Bruce Lee movies and Rocky movies, it was always like the strong, macho guy could protect his woman and I wasn’t able to do that. I didn’t want to go out, it was at least six or nine months before I left the house after that.

"I went into depression I guess. I decided what was I going to do about this, was I going to live inside forever or do what? I started looking into martial arts, I started researching styles to learn how to defend myself and that’s how I came across the UFC, mixed martial arts."