This is simply fantastic...

We've heard our fair share of national anthems before games but we think we've found our favourite rendition of a national anthem, which occurred before this Australian Baseball League game.

7-year-old Ethan Hall took to the pitch before Adelaide Bite took on the Brisbane Bandits but unfortunately for the poor little fella, he got a dose of the hiccups before the song started. 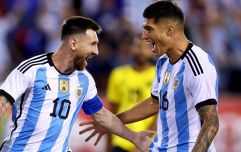 World Cup 2022: All the major action and talking points from Day Three

END_OF_DOCUMENT_TOKEN_TO_BE_REPLACED

But that wasn't about to stop Ethan from performing to the best of his ability and producing a fine performance punctuated with some percussive hiccups.

The players on both teams can be seen reacting to the boy's effort and there's a great moment at the end when the whole crowd rises to cheer Ethan and the players applaud his effort.

What a little trooper...

popular
Met Éireann updates weather warning for entire country as temperatures set to fall to -6
The "eighth best movie ever made" is among the movies on TV tonight
Céline Dion diagnosed with incurable neurological disease
5 deadly destinations for a last-minute city break this winter
Jennifer Lawrence sparks controversy by saying she was the first woman to lead an action movie
15 years ago, one of the greatest scenes of the 21st century arrived in cinemas
Mia Khalifa claims seaside town is better than Miami
You may also like
1 month ago
Man returns to his car to find a sofa had fallen from the sky and crushed it
1 month ago
Man goes on spending spree after couple transfers €490k house payment to wrong account
4 months ago
Australian senator brands Queen Elizabeth a coloniser as she's sworn in
4 months ago
Mary Lou McDonald tells Irish in Australia they have been "robbed of a life in Ireland"
4 months ago
5,000 jobs in Australia for Irish workers on offer at job fair next week
5 months ago
The JOE Friday Pub Quiz: Week 298
Next Page