While attempting to set a record breaking double front flip at a Nitro Circus event in Hamilton, Canada, motocross rider Bruce Cook missed his landing and ended up in hospital… 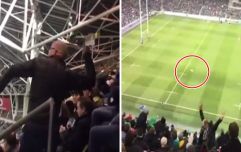 END_OF_DOCUMENT_TOKEN_TO_BE_REPLACED

According to Canada.com, Cook had never attempted a double front flip with solid ramps before, which made the stunt all the more dangerous on the night.

Apparently, Cook had never even completed a single front flip on a motocross bike when he came up with the idea of doing a double front flip for Nitro Circus' first ever Canadian show.

Thankfully, Cook is okay and is still recovering in hospital, but it could have ended a whole lot worse for the 26-year-old.

After 3-hours of back surgery, the motocross rider was quick to thank fans for their messages of support on Instagram: "Hey all. I am absolutely blown away by all the messages and well wishes. It has literally taken me hours to make it through most of them and appreciate every one of them. 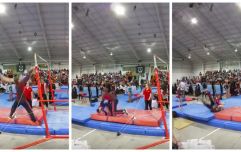 END_OF_DOCUMENT_TOKEN_TO_BE_REPLACED

"This morning I underwent 3 hours of surgery on my back and I'll likely be in hospital in Ontario for the remainder of the week at which time I will transfer to BC. Again, thank you so much for all the support and positive messages.

"My mom and dad are here with me and helping keep spirits high. I've got this!... There is definitely a smile under that mask :) Remember, smiles are contagious!"

popular
Netflix has just added an incredibly tense 97-minute thriller
Prime Video has just added 25 very big movies to its library
The Ultimate "That Actor From That Thing" Quiz
Stunning Mayo beach named the best place to swim in Ireland and the UK
The 50 most iconic songs of all time* have been revealed
WATCH: House of Hammer details the alleged crimes of award-winning actor Armie Hammer
Tarantino's sequel to Django Unchained is now officially dead
You may also like
1 month ago
Radio station plays 'Killing in the Name' non-stop from 6am after multiple staff get fired
1 month ago
Aer Lingus announces flash sale on flights to America this summer
1 year ago
Canada has been removed from the mandatory hotel quarantine list
1 year ago
Canada becomes first country to approve use of Pfizer vaccine for kids over 12
2 years ago
At least 16 dead following shooting in Canada
2 years ago
Wife of Canadian Prime Minister Justin Trudeau tests positive for the coronavirus
Next Page