Forget the Jamaicans; it’s all about the Irish bobsleigh team in Sochi 2014...

With quotes like, "Everyone goes on about these Jamaicans, but I call them Jamaicants" and "At the end of the day, sher what's snow, only colder rain", these four Irish lads seem like the perfect candidates to become Ireland’s next top bobsledders. 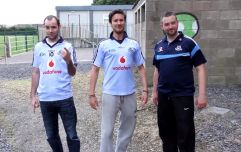 END_OF_DOCUMENT_TOKEN_TO_BE_REPLACED

In fairness, nothing says 'professional bobsledder' like an old Cooper hurling helmet…

The four lads in the video actually come from DCU and you may recognise some of them from the hilarious Anchorman parody that we featured back in December.

The clip was directed by David Atkinson and edited by Stephen Kampff, and it stars Kenneth Browne, Niall Farrell, Brian McLoughlin, Peadar Gill and Ross McCarrick.

It’s yet another great video from the lads in DCU’s Media Production Society and if you liked what you saw above then you can check out more of their stuff over on YouTube.

popular
One of the best action movies of recent years is finally available to watch at home
Jim Carrey's greatest performance is among the movies on TV tonight
The JOE Movie Quiz: Week 138
QUIZ: Give this General Knowledge Quiz a whirl
The JOE Friday Pub Quiz: Week 278
QUIZ: Can you name every Batman actor in three minutes?
QUIZ: See if you can ace this General Knowledge Quiz
You may also like
2 months ago
EXCLUSIVE: Stephen Donnelly compared to Ron Burgundy and David Brent by senior officials in explosive new book
2 years ago
Fancy kickstarting your mortgage at a free Anchorman screening in Waterford?
2 years ago
WATCH: Ron Burgundy challenged one of 2019's biggest pop stars to a jazz flute challenge
3 years ago
Anchorman 3 could be happening as the director shares his idea for the bonkers plot
4 years ago
Which movie has the funniest blooper reel?
4 years ago
Steve Carell wants to shoot Anchorman 3 in Ireland
Next Page