Video: Yet another dramatic sporting victory for the Irish as Ireland beat Zimbabwe in cricket

The Irish cricket team narrowly beat Zimbabwe with the last ball of their World Twenty20 opener in Bangladesh earlier today.

Zimbabwe posted 163 runs from five wickets but it wasn’t enough to beat the Irish who batted second and came away with 164 runs from seven wickets.

In the end, a quick 60 from Paul Stirling put Ireland in the lead with just four runs need from the last over... or the last six balls if you’re not overly familiar with the sport. 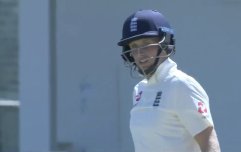 END_OF_DOCUMENT_TOKEN_TO_BE_REPLACED

Only one run was needed from the last ball and following a bit of a mix up on the crease, Stuart Thompson managed to get across the line to give Ireland the win. The Irish team is now off to a great start in the Twenty20 and fair play to all the lads wearing green out in Bangladesh.

To keep up to date with the Irish cricket team make sure to follow Cricket Ireland over on Twitter.

popular
One of Keanu Reeves' best movies has just been added to Netflix
A terrific crime thriller is among the movies on TV tonight
The JOE Movie Quiz: Week 131
QUIZ: Do you reckon you can get 15/15 in this General Knowledge Quiz
QUIZ: Can you get full marks in this General Knowledge Quiz?
Daniel Craig's best pre-James Bond film is among the movies on TV tonight
The 50 most iconic songs of all time* have been revealed
You may also like
2 years ago
England cricket player Ben Stokes describes The Sun as "low and despicable" in strong statement
2 years ago
In case you missed it, the Cricket World Cup Final was absolutely mad
3 years ago
WATCH: Australian cricket player caught cheating mid-game on the big screen
4 years ago
WATCH: This man is an absolute pro at handling his drink
4 years ago
WATCH: Some Irish fans were really feeling the heat watching the cricket on Sunday
4 years ago
VIDEO: If you find cricket boring, Dara O'Briain's commentary will change your mind
Next Page