JOE is very confident in saying that the Argentinian national team have a truly woeful selection of strikers.

It's not like they can boast about having the genius talents of La Liga and Champions League's record goalscorer Lionel Messi or the one man goal machine that is Sergio Aguero to call upon. 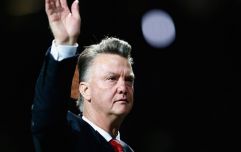 END_OF_DOCUMENT_TOKEN_TO_BE_REPLACED

Messi broke the Champions League record when he notched his 72, 73 and 74th goals in Europe's elite club competition against APOEL but Sergio Aguero scintillating hat-trick against Bayern was the real story of the night  as Man City recovered from a horrific first 45 minutes to pick-up a valuable three points.

Here's Aguero's opener from the penalty spot on 21 minutes as Benatia sees red for the Bavarians.

The Argentinian pulled Man City level with this cool finish on 85 minutes.
The former Atletico Madrid striker completed his hat-trick after capitalizing on a poor mistake from Xabi Alosno. We still love Xabi though.

Advertisement
House of Rugby Ireland · Quinn Roux on finding a home in Ireland and Mike McCarthy brings the absolute HEAT!
popular
The JOE Movie Quiz: Week 85
QUIZ: Name all the countries of the EU that contain 2 vowels or less
QUIZ: Can you name the Marvel Cinematic Universe film from just a single screen shot?
Recall of Pedigree dog food over safety concerns
QUIZ: Can you correctly identify these European country flags?
The 50 most iconic songs of all time* have been revealed
PIC: This is where Irish men rank in the world map of erect penis size (NSFW)
You may also like
5 years ago
Pic: US TV station makes a balls of describing how the European football calendar works
5 years ago
Ruud van Nistelrooy on Roy Keane's greatest quality, Ronaldo and his best mate at Man United
5 years ago
Video: Take a look at a teenage Lionel Messi playing against Juventus
5 years ago
Pic: Brilliant graphic shows how effective Messi, Suarez and Neymar are playing together
5 years ago
Video: Luis Suarez' sublime piece of skill left Benatia looking absolutely clueless
5 years ago
Video: Proof that Real Madrid's goalscoring machine Cristiano Ronaldo doesn't skip leg day
Next Page