We hope she clattered him after.

The Man City players were left with egg on their faces this afternoon as Middlesbrough knocked the Premier League champions out of the FA Cup with a deserving 2-0 win at Eastlands.

It's a shame though that the mother of this City supporter had to suffer also as she ended up with egg on her back due to her sons bold tweet that backfired spectacularly. 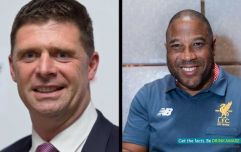 END_OF_DOCUMENT_TOKEN_TO_BE_REPLACED

City supporter Mike was so confident that Pellegrini's men would win against the Championship side that he sent this bold message out into the Twitterverse. This tweet definitely wasn't a cracking idea though because he was b-egging for problems.

Goals from Bamford and Pike meant that the 'yolk' was on Mike because as he had no other choice but to incur the wrath of his poor mother.

It seems like Mike didn't need to be egged on though and this clip cracked us up.

House of Rugby Ireland · Quinn Roux on finding a home in Ireland and Mike McCarthy brings the absolute HEAT!
popular
The JOE Movie Quiz: Week 86
Majority of English people 'pleased' or 'not bothered' by prospect of united Ireland
The JOE Movie Quiz: Week 85
Gardaí uncover functioning shebeen in Swords
Ireland adores Leitrim hurler Zak Moradi on Tommy Tiernan show
QUIZ: The JOE Music Quiz: Week 41
20 of the best comedies to watch on Netflix right now
You may also like
1 year ago
Fancy FA Cup Final tickets? Our Crossbar Challenge game could be your last shot
1 year ago
Think you can get a top score in our Crossbar Challenge game?
2 years ago
The Premier League is finally getting a winter break
2 years ago
There was a sinister reason Sergio Aguero lashed out at a Wigan fan last night
2 years ago
WATCH: Sergio Agüero involved in on-field altercation with a fan after Man City’s FA Cup exit to Wigan
2 years ago
Viewers were absolutely furious at the VAR graphic resulting in Mata being offside
Next Page