Declan Rice is quickly starting to look like another one that got away.

The West Ham centre-half/central midfielder was not named in Martin O'Neill's most recent Ireland squad, and the boss confirmed that he is taking some time to consider the possibility of playing for England instead. Rice has already played three friendlies for Ireland.

Upon hearing the news, Kevin Kilbane, a dedicated servant to the Irish national team with 110 caps, took to Twitter to give his all for Ireland once more. This time, it involved going in studs-up on the 19-year-old Rice.

Kilbane wrote: "I’d rather be ranked 150th in the world and never qualify again than have someone who has played, but needs time to THINK whether they should play for us again". He was quickly backed up by current international James McClean, who affirmed his views as "bang on".

The consensus among Irish football fans, by and large, is that Declan Rice is a traitor to the cause, and should never play for Ireland again — even if by some chance he decides not to declare for England.

I’d rather be ranked 150th in the world and never qualify again than have someone who has played, but needs time to THINK whether they should play for us again. Well done to MON for transparency. https://t.co/6oXlwXEpaP

There's a lot to consider here. First must be that Declan Rice is 19. He's so young that he can't even remember Saipan. He can't be expected to have any great grá for the more magical moments of Ireland's footballing past — he can't remember any of them.

Second, we are, quite simply, not very good. You might even say that we're bad. England, on the other hand, are a cornucopia of youth and vigour and excitement, led by a manager who seems to do things besides get into rows with Tony O'Donoghue.

So far, Rice is not good enough to get anywhere near their side, but he's only 19. You couldn't rule it out. With his status as an English international, he'll command higher wages, higher transfer fees and own a far more lucrative personal brand.

END_OF_DOCUMENT_TOKEN_TO_BE_REPLACED

But all footballing considerations aside, we simply have no right to render such a judgment. Why? Well, because... Declan Rice is English.

Irish people are fiercely nationalistic. No more so than when the English are claiming one of our own for themselves. Whether its Barry Keoghan, Cillian Murphy, Katie Taylor or Conor McGregor, our outrage is always piqued when that old English ignorance rears its head — usually soon after an Irish person has tasted some success on the world stage.

Still, we will readily embrace rugby players like Bundee Aki and CJ Stander to our collective bosom, even though somewhere far away, their countrymen surely feel hard done by that they've chosen to play for a country where they've only lived for a couple of years.

James McClean himself, it could be noted, played several games for the Northern Ireland under-21s side before ultimately deciding that he would rather play for Ireland. Why? Probably because expecting him to have his mind made up about what the right choice for him, both personally and professionally, by the age of 18 or 19 is patently ridiculous. 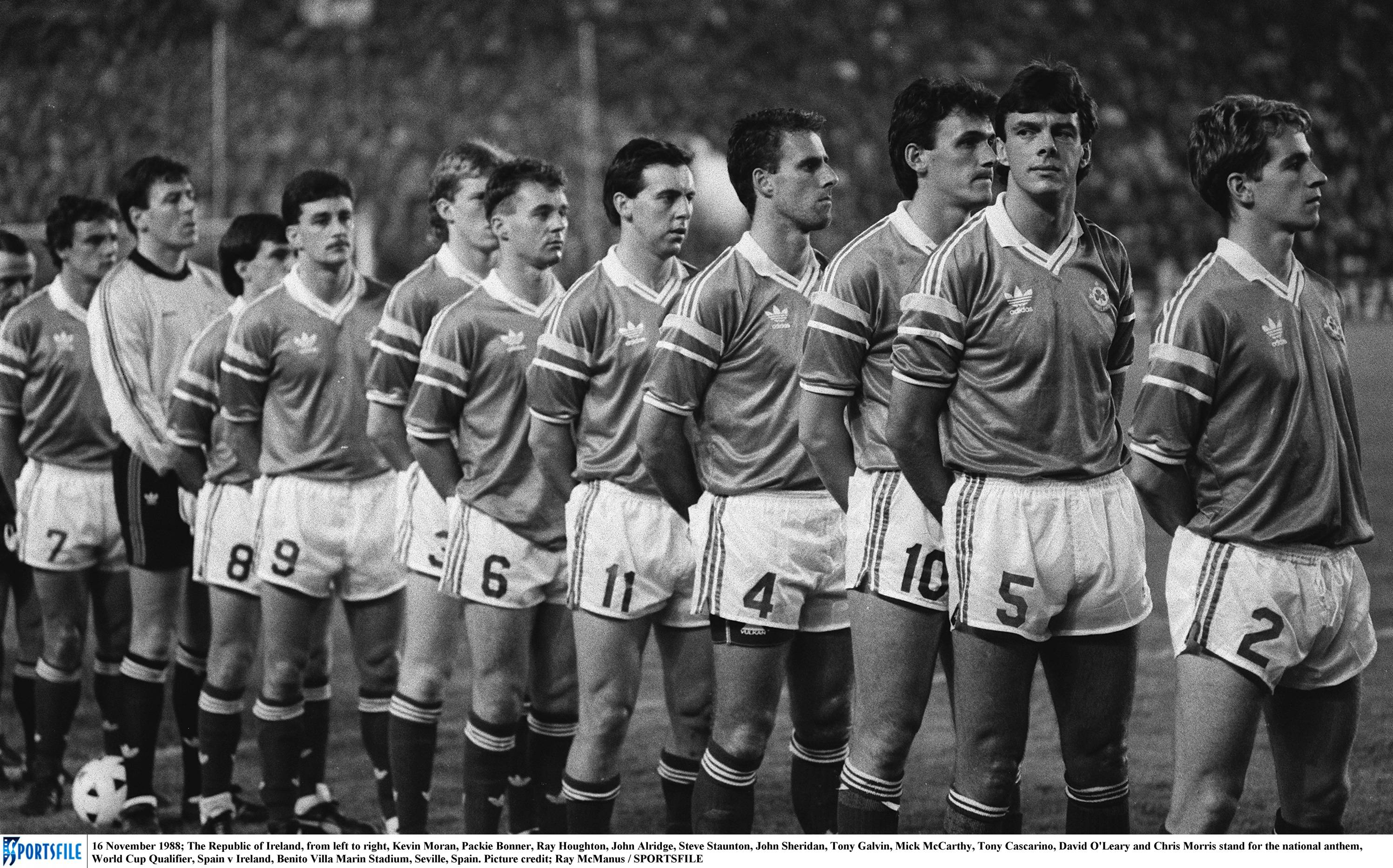 Our ears prick up when we hear that decent but limited talents, such as Callum Wilson, are considering declaring for Ireland — knowing full well that we'll back them to the hilt. Born Englishman Jonathan Walters knows that better than anybody.

Ray Houghton. John Aldridge. Jon Walters. Andy Townsend. Chris Hughton. Mick McCarthy. We're lying to ourselves if we believe that we were Plan A for all these guys from the day they were born. They made a decision that was in their best interests, and it just so happened to be in Ireland's best interests too.

Not a single player who scored in Ireland's famous Italia '90 penalty shootout with Romania was born in Ireland. When you go to the Granny Rule well as often as we do, you can't really be all that aggrieved that once or twice it leaves you high and dry.

END_OF_DOCUMENT_TOKEN_TO_BE_REPLACED

How many ways can we expect to have it? If we're going to be brazen enough to call Daniel Day-Lewis Irish just because he moved here and seems to like it quite a lot, then we might have to relax our expectations of other English people who might not be quite as in love with their ancestral roots. Particularly children. The Granny Rule cuts both ways.

It shouldn't need pointing out that relying on the thin filial bonds of a teenager to the country of his ancestors is not a sound strategy for footballing success.

Declan Rice, much like Jack Grealish before him, is English. He was born and raised in England and he's eligible to play for Ireland through his Corkonian grandparents.

My hope all a long has been that Declan first becomes an England player and then follows in the footsteps of the great Bobby Moore by becoming the captain of England.

Born in England made in West Ham United. dg https://t.co/Yx8auOlcSF

We're not just talking about mislabelling someone on a Sky News chyron or an uneducated BBC news anchor who doesn't know where Wexford is. We're asking for a pledge of allegiance from somebody who doesn't actually owe us any.

We would be remiss in overlooking the shameful part being played by West Ham owner David Gold, who has chosen to publicly exert pressure over such a young player. While Declan Rice will ultimately make his own decisions, for the owner of his club to prejudice the situation to that degree is despicable.

That being said, the vitriol that has been turned his way by some Ireland fans is little better. The argument is that Ireland should never be a Plan B, that every player should be proud to pull on his country's jersey, really only if Ireland really is the player's country.

When we are so obsessed with and possessive of our own Irishness, how can we possibly judge an English man who wants to be English?

It is a good thing to welcome everyone who wants to be Irish. It is a bad thing to throw it back in their faces if they decide not to be.

Declan Rice isn't a traitor. It doesn't matter that he kissed the Irish crest. Sure, football could use fewer overwrought displays of loyalty — but that didn't start with Declan Rice and it certainly won't finish with him.

We're proud to be the Plan B team when it suits us. When it means we might snag the Callum Wilsons or even the Mark Nobles of this world. Players will see us as a Plan B team until we stop seeing ourselves that way.

Maybe that's something that can finish with this whole sorry saga.


popular
Donald Trump takes aim at Parasite's Oscar win because the movie is from South Korea
QUIZ: How well do you remember these classic PS2 games?
Here are all the best new titles coming to Netflix in March
New weather warning issued for three counties
Mary Lou McDonald wins most votes, but no Taoiseach elected after first sitting of 33rd Dáil
Laura Whitmore hits out at paparazzi photographing her following Caroline Flack's death
Gardaí search for owner of "quantity of gold Krugerrands" in Limerick
You may also like
1 month ago
The EA SPORTS™ FIFA 20 Team of the Year has been revealed
1 month ago
WATCH: Clinton Morrison stole the show doing punditry this weekend with a moment of brilliance
2 months ago
Here's how you can vote for EA SPORTS™ FIFA Team of the Year
2 months ago
The JOE Friday Pub Quiz: Week 169
2 months ago
Football, beef and the IRA - RTÉ's documentary on League of Ireland players in Libya looks great
4 months ago
Post-match analysis of the Rebekah Vardy/Coleen Rooney beef
Next Page