What World Cup record does the Republic of Ireland now share with only Germany and Holland?

Germany just won the World Cup and Holland, despite not making the final, are three-time finalists so what exactly do we have in common with this illustrious pair?

With the World Cup now over a lot of facts and figures have spilled out and one in particular caught the JOE eye. Compiled by Opta and published in the Guardian, these are football nerds dream. There was some interesting stuff such as 'All eight group stage winners progressed to the quarter-finals stage for the first time in World Cup history.' or 'Three of the last four teams to win the World Cup have gone out in the following group stage (France 2002, Italy 2010, Spain 2014).'

But the most interesting group stage information to us was that only three teams in the history of the World Cup - who have qualified more than once - have now always progressed from the group stages: Germany, Holland and the Republic of Ireland.

Ghana's exit this time, in their third World Cup, reduced the illustrious group to three. I think that merits a hearty rendition of 'Ole, Ole, Ole' wherever you may be. 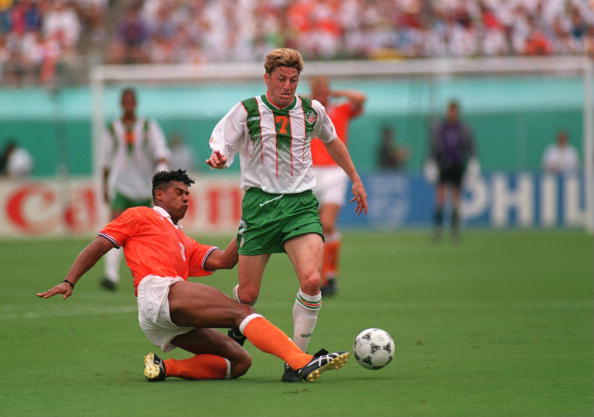 END_OF_DOCUMENT_TOKEN_TO_BE_REPLACED

We played in the 1990 tournament in Italy, the following tournament in 1994 in the USA (pic above) and in 2002 when it was hosted by Japan and South Korea. Each time we qualified from the group. Look at us in that esteemed company. Surely we should get some sort of an award or maybe automatic qualification to Russia in 2018.

popular
One of the best movies of the decade has just been added to Netflix
Cristiano Ronaldo 'agrees £173m-a-year deal' with Saudi club
The latest Star Wars episode is directly based on an IRA funeral
Country singer Jake Flint, 37, dies in his sleep just hours after his wedding
Katherine Ryan says famous TV star is a ‘predator’ and everyone in industry knows
20 years ago, one of the best sci-fi movies of the 21st century was a box-office bomb
Surprise frontrunner emerges as potential next James Bond as producers 'love him'
You may also like
4 days ago
World Cup 2022 Day Six: All the major action and talking points
4 days ago
Japan fans explain why they clean up after World Cup matches
5 days ago
The JOE Friday Pub Quiz: Week 322
6 days ago
Japan supporters clean up rubbish following famous win over Germany
6 days ago
ITV football pundit Nadia Nadim heartbroken as mother killed by a truck
6 days ago
Non-league side make approach for 37-year-old free agent after World Cup
Next Page