If you want to see a Liverpool fan spit, just mention the name El-Hadji Diouf, a man who himself is no stranger to the oral evacuation of his bodily fluids.

END_OF_DOCUMENT_TOKEN_TO_BE_REPLACED

He was a nasty piece of work, spending a couple of controversy-filled seasons at Anfield from 2002 before spells at Blackburn, Leeds, Bolton and Rangers among others.

Well, the 37-year-old wants to follow in the footsteps of George Weah - who became President of Liberia last year - and become an example to the youngsters of the Senegalese nation. 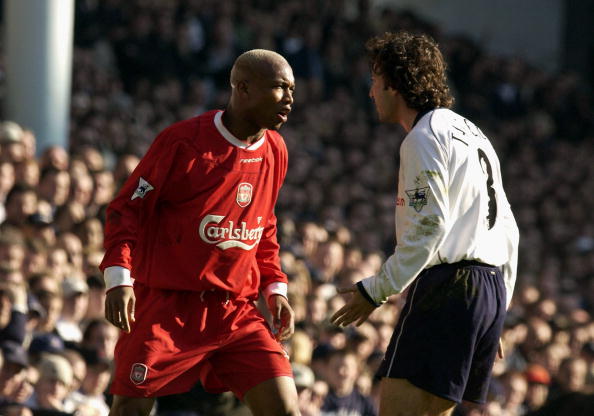 "I am looking after myself and my family. For many years I use to think about football but I have a new career and it is a political career," he said.

END_OF_DOCUMENT_TOKEN_TO_BE_REPLACED

"I have taken the decision to do politics because I have people waiting for me to change things in my country and I'm ready to do that because I want to be the soldier of the youngsters.

"My future is defined. In the next two years I'll be joining politics, because I know from that point I can change a lot in football. I have a lot of passion for politics, and I have people in Senegal who are mentoring me. That is the future for me, because a lot of Senegalese people are able to listen to me."

Senegal's gain is coaching's - and football's - loss as Diouf has decided against a career in training young footballers to go wherever the ball isn't and taunt injured opponents.

"I took high-level coaching courses, but decided not to continue since I have better plans for things I want to do."

Senegal, our hopes and prayers are with you at this difficult time.

popular
Amazon Prime Video has just added 21 big movies to its library
Emirates is looking to hire cabin crew members in Ireland for tax-free jobs
Amber Heard "fought really hard" to appear in Aquaman 2 despite pared down role
Shock as dead dolphin vandalised with graffiti on Dublin beach
One of Liam Neeson's best ever performances is among the movies on TV tonight
The six Eurovision countries with "irregular voting patterns" have been revealed
Fianna Fáil denies paying for bots to boost Stephen Donnelly tweet
You may also like
1 day ago
Coleen Rooney calls Rebekah Vardy's leaked texts read in court "pure evil"
1 day ago
Work more hours or get a better job to tackle cost of living, says UK Minister
3 days ago
Boris Johnson reveals he is distracted by cheese and coffee when working from home
4 days ago
Mourners attacked during funeral of Al Jazeera journalist Shireen Abu Akleh
4 days ago
Calling men bald is now sex harassment, judge rules
6 days ago
Passenger safely lands plane after pilot falls ill despite having "no idea" how
Next Page