Truth be told, we're not against it.

END_OF_DOCUMENT_TOKEN_TO_BE_REPLACED

A few months ago, the tech giants unveiled the design for a new TV, called 'The Wall', and they're returned with an even bigger version of it.

The South Korean electronics giant have unveiled 'The Wall Luxury' and it's a beast.

Actually, it's not a beast, it's what you would send to kill a beast.

According to Samsung: "The Wall Luxury is configurable and customisable to a variety of sizes and ratios from 73” in 2K definition, to 292” in 8K definition. With a depth less than 30mm, the slim, bezel-less infinity design, along with customisable décor frames, allows the display to blend seamlessly into its surroundings, ensuring no disruption to the desired ambience of its environment."

The Wall Luxury will be equipped with an AI picture quality engine, known as Quantum Processor Flex, which will use AI upscaling and machine learning to optimise picture quality on a scene-by-scene basis.

On top of this, The Wall Luxury is said to offer Quantum HDR technology for a peak brightness of 2,000 nits (a measurement of how much light the TV screen sends to your eyes), as well as a 120Hz video refresh rate, making it ideal for watching sports or playing video games.

Do we want it? Hell yes! 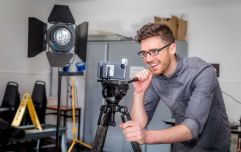 A smartphone film festival is kicking off in Dublin this month

END_OF_DOCUMENT_TOKEN_TO_BE_REPLACED

The Wall is also designed to never turn off, but to change into a digital canvas that best matches the individual's interior needs and personal mood.

Given the customisable nature of The Wall Luxury, Samsung has yet to announce pricing for the next generation of MicroLED TVs.

We imagine the larger models will be quite expensive when they go on sale in July.

popular
Public urged to be wary of sophisticated Revolut scam in operation in Ireland
10 years ago this week, Liam Neeson's best performance arrived in cinemas
New Netflix series looks like a must-watch for fans of Drive to Survive
'The Beast' apologises for storming off after losing on The Chase
A gripping mystery thriller is among the movies on TV tonight
Over one-third of female students have experienced non-consensual penetration, survey finds
Man charged following incident involving deceased man at Carlow post office
You may also like
15 hours ago
An all-star murder mystery and 7 more movies and shows to watch this week
22 hours ago
10 years ago this week, Liam Neeson's best performance arrived in cinemas
1 day ago
WATCH: Mrs Brown is appearing in an American Netflix movie
1 day ago
Bradley Cooper finally confirms his directorial follow-up to A Star Is Born
2 days ago
Prince's team stop Nothing Compares 2 U being used in new Sinead O'Connor doc
2 days ago
8 great new (and classic) additions coming to Prime Video in February
Next Page