No punches pulled from the Green Party leader here.

Law makers from nine different countries gathered in Leinster House on Thursday evening for the third meeting of the International Grand Committee (IGC) on Disinformation and ‘Fake News’.

The ICG - which is an international gathering of politicians, who meet to discuss the behaviour and regulation of social media platforms - met at 9am on Thursday morning, with special attention being paid to the subject of 'Fake News'.

According to RTÉ, Ryan said: "Facebook is probably the most toxic political platform. I'd invite you to visit my own Facebook page and see the nature of the commentary that is increasingly prevalent on the platform. It's not a community, it's war."

"It is the business model, not just in relation to political advertising, but the whole organic commentary model is leading to political discourse that is not community - it is hate speech and abuse. That is the experience of every politician I have met. Are we all wrong?" 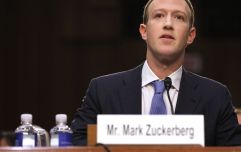 END_OF_DOCUMENT_TOKEN_TO_BE_REPLACED

The goal of the meeting is to agree a set of principles to underpin international collaboration in tackling issues relation to social media "while at the same time respecting freedom of speech."

More information on Thursday's meeting can be found here.


popular
Met Éireann says there's a risk of snow for parts of Ireland this weekend
QUIZ: Can you guess the pixellated movie posters?
Teenager arrested in relation to death of Cameron Blair at a house in Cork
QUIZ: Can you name all these European countries just from their vowels?
Here are Ireland’s favourite takeaways, as per the National Takeaway Awards
Aldi to recruit 550 new staff and implement living wage rate for employees
Dublin pub to host a 'doggy date night' where you can bring your dog to dinner
You may also like
1 month ago
The most talked about moments on Facebook in Ireland this year have been revealed
2 months ago
Facebook rolling out a way for users to make the app far less annoying
2 months ago
WATCH: Alexandria Ocasio-Cortez grills an uncomfortable Mark Zuckerberg at congressional hearing
3 months ago
Facebook to start hiding the number of Likes beneath posts
4 months ago
It looks like Facebook are planning on hiding their like counts
5 months ago
Irish Data Protection Commission to investigate Facebook for listening to Messenger conversations
Next Page