So many arguments can now be avoided.

Listen, with a little over two billions Facebook users worldwide, and the percentage of the Irish people who use it somewhere around two-thirds of the island's population (according to RTE), it is safe to say that this news will affect the majority of people reading it.

With that in mind, Facebook have launched a new 'Snooze' function that will undoubtedly alter the future of the majority of your friendships and relationships going forward. 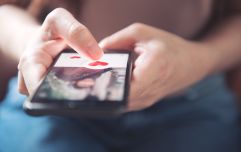 END_OF_DOCUMENT_TOKEN_TO_BE_REPLACED

The idea is that we've all been in that situation where a friend or family member or workmate or whomever has just had a major event happen to them, be it getting a new pet or getting engaged or having a baby or going on holiday to somewhere particularly picturesque that you've always wanted to visit...

Normally those feelings of infuriation, irritation or blinding jealousy would just have to be buried deep down, to sometimes bubble over as a snarky comment that you just couldn't stop yourself from posting.

Alternatively, you could go the extreme route of unfriending, or there was the muting option, but chances are you'd forget to unmute them once they'd gotten over the newness of having a baby or engagement ring or the sunsets in Bali.

The new 'Snooze' button will only hide their posts from your feed for the next 30 days, which should be more than enough time for your anger/jealousy to subside.

Facebook have even posted this handly little video to show you how it works.

House of Rugby Ireland · Munster can't beat Leinster, Six Nations squad and John Cooney interview
popular
Holly Willoughby criticises influencer for travelling to Dubai during pandemic
Lidl to open six new stores and create 1,200 jobs in Ireland over the next year
QUIZ: Can you name all of these countries just from one of their cities?
New Zealand set to close its borders for the entirety of 2021
Leo Varadkar says if Ireland introduced mandatory hotel quarantine, it would have to do so for a year
Here are the best movies on TV tonight
The 50 most iconic songs of all time* have been revealed
You may also like
1 month ago
Facebook to remove false claims about Covid-19 vaccine
3 months ago
Facebook bans QAnon accounts across all its platforms
3 months ago
Facebook responds to The Social Dilemma criticism
7 months ago
Facebook takes down Trump ads for violating policy against "organised hate"
1 year ago
Facebook bans deepfake videos ahead of 2020 US election
1 year ago
The most talked about moments on Facebook in Ireland this year have been revealed
Next Page