The contract has been shrouded in scandal, and former Minister for Communications Denis Naughten was forced to resign when it emerged that he had privately dined with David McCourt, one of the men behind Granahan McCourt/National Broadband Ireland, the consortium to whom the contract was eventually awarded.

The plan was originally estimated to cost €500 million, but it has since been confirmed that the cost to the public will be €3billion. The aim of the NBP is to provide high-speed broadband to 1.1 million people across 540,000 premises.

Taoiseach Leo Varadkar has shared a county-by-county breakdown of where funds from the National Broadband Plan will be allotted on social media. The figures reveal that €314 million will be spent in Cork, where the state will be intervening at 78,695 premises. This outlay is followed by Galway, where €153 million will be invested.

The county-by-county breakdown can be seen below: 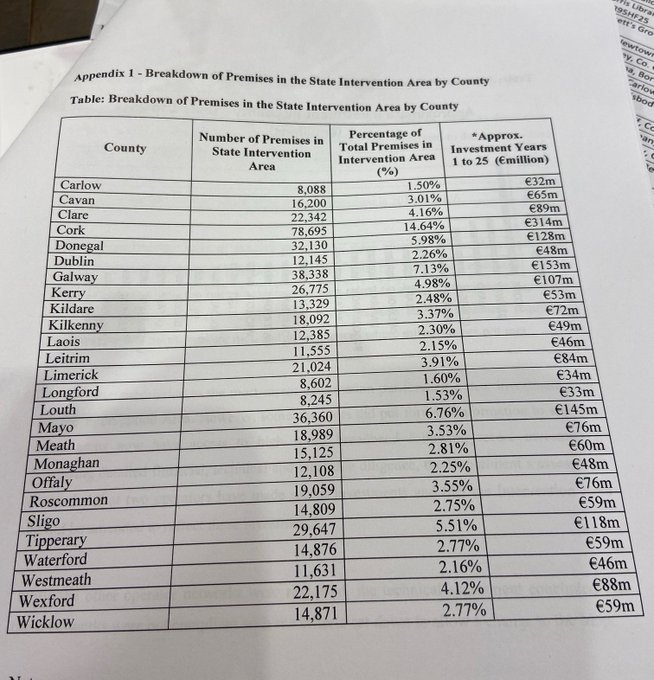 END_OF_DOCUMENT_TOKEN_TO_BE_REPLACED

"I have already been informed of complaints to the European Commission. Broadband operators have also already informed me that they intend challenging the intervention area for the plan, despite commission approval. That could lead to further delay or cost for this plan. Minister Bruton needs to urgently clarify what he will do if these challenges are successful," said Chambers.

"The signing of a contract for the National Broadband Plan should be a momentous day for rural Ireland. Instead, the cost overruns, delays and political hi-jinks which have dogged the plan will likely only leave a sour taste in taxpayers' mouths."

Earlier this year, communications company Eir claimed that it could have delivered a national broadband plan for less than €1billion.


popular
Downton Abbey creator confirms plans to start work on a sequel
QUIZ: How many of these Recess characters can you name?
QUIZ: How many of these characters from Breaking Bad can you name?
Disney+ has brought forward its launch date in Ireland and confirmed its price
The 50 most iconic songs of all time* have been revealed
WATCH: Trailer released for CG remake of Pokémon: Mewtwo Strikes Back
There’s a massive battle rap event happening in Dublin next month
You may also like
13 hours ago
Man arrested after threatening Gardaí with knife and stealing cash in Dublin
17 hours ago
Sinn Féin writes to Virgin Media objecting to FG/FF debate
1 day ago
Gardaí seize over €175,000 in cash and €50,000 worth of cocaine in Galway
1 day ago
Fine Gael general election candidate has bricks thrown through window of constituency office
1 day ago
Man in serious condition after being doused in petrol and set on fire during burglary in Cork
1 day ago
Gardaí warn of phone scam that could cost consumers a "small fortune"
Next Page