Infographic: The top sports teams on social media are...

The results are in, and the teams with the biggest following online have been announced. Thankfully we have an infogaphic too, so there ain't no readin'

Surprisingly, some of the biggest names in the Premier League don't feature, like Liverpool and Manchester United. Instead, their city rivals, City, are right up there, while Real Madrid and Barcelona dominate. The full top five is Real Madrid, Barcelona, Manchester City, Galatasaray (another surprise entry we'd say) and Chelsea. 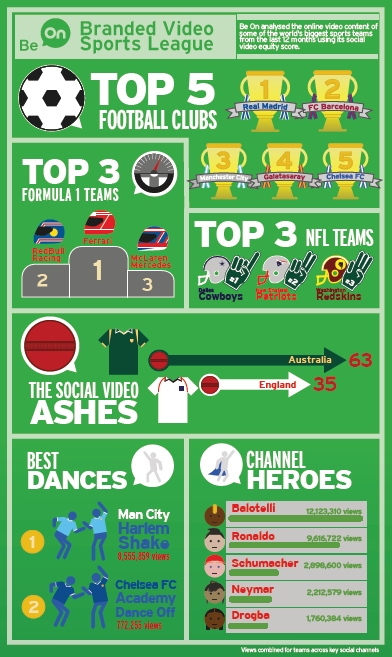 END_OF_DOCUMENT_TOKEN_TO_BE_REPLACED

They also had a look at who has the biggest and most engaged following amongst the individual players on their social platforms, and despite Ronaldo having a whole heap of followers, the interesting antics of our mate Mario Balotelli have won out the day. Good aul Mario.

The stats were put together by AOL Networks 'Be On', and they judged the winners based on volume of content, number of views, engagement, creativity and overall quality of video on owned and social channels for each of the teams and players.

They've also got information on the top Forumla 1 teams (no surprise that Ferrari still top that list, but Red Bull aren't far behind), and the top teams in the NFL, with the Washington Redskins (currently debating whether or not they should change their name) and the Ashes. The full list of the top ten engaged teams on social media are as follows:

popular
Amazon Prime Video has quietly added 10 big new movies to its library
Yet another new Wetherspoons is set to open in Dublin city centre
The new restrictions likely to be introduced as NPHET meets with Govt
The 50 most iconic songs of all time* have been revealed
8 great new additions to Amazon Prime Video in December
House of Gucci has the best sex scene from a big Hollywood movie in years
Clint Eastwood's final western is among the movies on TV tonight
You may also like
1 month ago
The JOE Friday Pub Quiz: Week 264
3 months ago
Manchester City's Benjamin Mendy charged with four counts of rape
3 months ago
Michael Ballack’s son Emilio, 18, dies in 'quad-bike crash’
3 months ago
Five football documentaries to watch to kill time before the new Premier League season
4 months ago
Basketball Ireland Chief apologises for social media post following controversial England penalty in Euro 2021 semi-final
5 months ago
Christian Eriksen shares first update from hospital as he undergoes tests after cardiac arrest
Next Page