The latest offering from the next-gen consoles certainly has plenty of style, but is there substance hidden beneath?

If you remember the inFAMOUS games from PlayStation 3, then you'll already be familiar enough with the sort of thing you can expect from Second Son, which is a reboot, of sorts, of those two titles. There are some noticeable differences in that this time the setting is Seattle, rather than the fictional 'Empire City' or 'New Marais' (we'll let you take a wild stab in the dark as to which cities they could possibly be based on) and you're no longer playing with Cole McGrath, but some things stay pretty similar.

This time around you've got smoke powers, which allow you to do things with smoke like shoot fireballs, turn into smoke, etc. As in the previous titles you need to recharge those powers by absorbing smoke for later use, and you've got to take on the Department of Unified Protection or DUP, who are out to catch all the Bio-Terrorists. On a side note, on the billboards around the game you can spot the number 1-844-HELP-DUP, encouraging you to turn in suspicious bio-folk, which apparently does work if you call it, and you can get through to a pre-recorded message which is a nice touch in the marketing campaign.

END_OF_DOCUMENT_TOKEN_TO_BE_REPLACED

Anyway, let's get down to the nuts and bolts. When you first start the game up you will notice the visuals are pretty spectacular, as the game is set in a tranquil enough Native American settlement outside of Seattle, with plenty of lovely forests and mountains to feast your eyes on far away into the - rather impressively drawn - distance.

Two things that inFAMOUS has tried to do differently here is to make their game stand out from the crowd with the storyline and the setting: It all takes place in real life Seattle (Space Needle and all) and your character is a Native American called Delsin Rowe. The last Native American character we can remember off hand in any game is Chief Thunder in Killer Instinct. 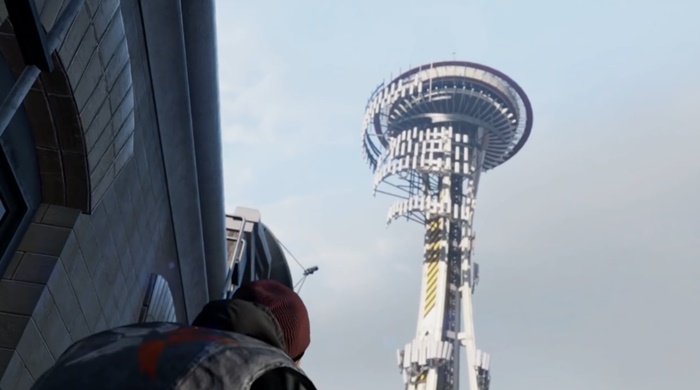 As always, you have the choice to become a good guy or a bad guy essentially, and that starts early enough with your decision to either sell out your tribe to protect yourself or turn yourself in to the DUP and the evil Augustine, who turns people in to concrete and has done her best to leave all the members of the tribe dying a slow death.

This is your first step on the road to becoming a sound fella or an inFAMOUS bad guy, and as you progress through the game you can choose to help injured citizens and subdue injured or surrendering enemies for good karma, or kill everyone for bad karma.

With those decisions come different powers, and obviously the really cool powers are on the evil side of the spectrum. JOE is not encouraging you to do that, but if you want to shoot really cool fire balls or jump higher then go evil, if you want to be able to heal yourself a bit faster, go good guy. We're just laying out the choices. 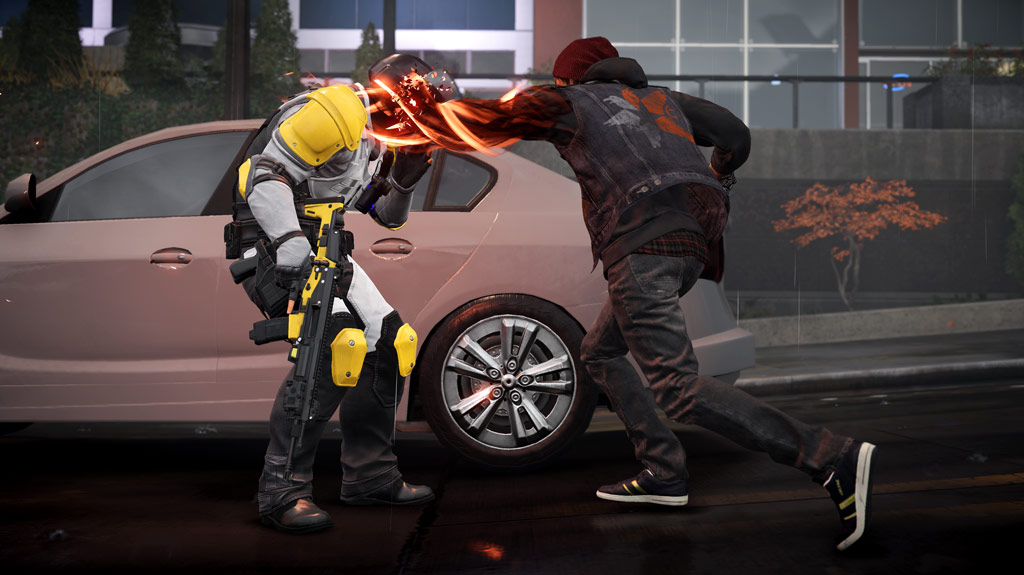 END_OF_DOCUMENT_TOKEN_TO_BE_REPLACED

You get more powers as you progress through the game, Neon and Video, the latter being a very strange experience altogether, we won't spoil it too much though, you can play and see for yourselves. Anyway, the powers themselves are pretty well executed. As with everything in the game they look great, and they don't make you overly super-powered, as the DUP agents have a few powers too, and you face boss characters that will test you a little bit.

A few problems do emerge – it feels as though the game tries to appeal to a broader demo than it should, with some parts of the game feeling very juvenile, in particular the start as you learn your powers, and Delsin's constant wise cracks, which provide some comic relief, but get old quickly. It's also pretty hard to get killed: you've got a fast-healing ability so once you come across a bit of danger, you can just leg it off and recover for a few seconds.

Overall, you get the feeling that the visuals are the selling point for this game. There are little touches that make use of the touch pad on the PS4's controller (which we are still getting used to seeing as not many of the games use it yet) as well as the controller's motion sensors. For example, in the very first action in the game you have to spray paint something, and to do so you need to turn the controller on its side, shake it and use it like a spray paint can, a great little touch.

Anyway, all that aside, the gameplay does feel a little flat and a tad formulaic at times. As you get more powers it becomes more interesting, and the sandbox world that you inhabit has plenty of sideline tasks for you to do too, although some will only interest those who enjoy completing a game 100 per cent.

END_OF_DOCUMENT_TOKEN_TO_BE_REPLACED

Having not played the second inFAMOUS game, this one certainly seems to be a step up, and could well be the best in the series, and it does offer something new to those PS4 owners who have hungrily been waiting for new titles since November. There are hours of gameplay here, but if there was something with more of a challenge involved, then this would be a serious addition to what the new console has to offer.

Still worth a look though, we must say, and if you're looking to pick it up then there's no better bet than our mates at Littlewoods Ireland, who have a huge selection of games, consoles and accessories, plus free shipping.

The Big Reviewski || JOE · The Big Reviewski with Y: The Last Man, that Malignant ending & a secret streaming service
popular
The JOE Friday Pub Quiz: Week 261
The five "best places to live" in Ireland have been revealed
One of the best war films ever made is among the movies on TV tonight
One of the better Liam Neeson action romps is among the movies on TV tonight
QUIZ: Flex your brain definition with this general knowledge quiz
Daniel Craig says goodbye to James Bond in emotional farewell speech
Liam Gallagher reveals facial injuries and claims he "fell out" of a helicopter
You may also like
3 days ago
Deathloop review: The lovechild of BioShock and Dishonored
1 week ago
10 of the most exciting reveals from the PlayStation Showcase event
1 month ago
These are the free subscription games coming to PlayStation and Xbox in August
1 month ago
Pro Evolution Soccer has been killed off after 26 years
2 months ago
Netflix to start offering video games as part of service
2 months ago
FIFA 22 unveils biggest Career Mode update in years with 'Create A Club'
Next Page