Sharpen those lenses, Ireland's most creative photographers are being sought for 'The Snapys'

Global technology company Huawei and ‘The Snapys’ are reimagining their Instagram photography competition in order to find the most creative person in Ireland.

The competition enters its third year as Huawei Creatives, an initiative to sponsor and celebrate Irish talent.

The 2018 Huawei Creatives will maintain the competition format that will offer the winner what organisers describe as a "once-in-a-lifetime opportunity", although the exact details have yet to be confirmed.

After reaching over three million interactions last year, this year's competition is adding two new additions, the People's Choice awards and the Judge's Choice awards. 20 people will be chosen for each category - 10 by popular vote and 10 by a non-partisan judging panel, with votes not taken into consideration.

The initial 20 people shortlisted in each of the categories will be narrowed down to a category winner, who will receive a Huawei Mate 10 Pro, the company's new flagship device. The overall winner will then be chosen from the 13 category winners by an international judging panel. 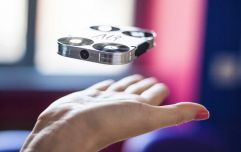 Your Instagram game is about take off with this new gadget

END_OF_DOCUMENT_TOKEN_TO_BE_REPLACED

Commenting on this year’s shakeup, Zena Ross, Huawei Ireland’s Marketing Manager says: "We wanted to work with The Snapys to elevate the competition’s purpose. This year will take a new angle where each category will be designed around an existing creative community - it is not just about photography but about empowering and recognising all forms of creativity and passion."

Last year’s fashion category winner, David Gannon, went on to win DCU’s Hybrid Photographer of the Year. In addition, Liz Stowe, the Huawei Snapys overall winner, was sent to Shenzhen, China in January 2017 to capture nine images over the week, while being coached by four mentors.

To enter simply upload your image on Instagram using #huaweicreatives and the relevant category hashtag.


popular
Sinn Féin announce a series of public rallies to take place in five counties
Met Éireann issue rainfall warning for 19 counties, with a side of snow
How well do you remember these classic PlayStation 2 games?
QUIZ: How many of these Derry Girls characters can you name?
QUIZ: Can you name the Sega Mega Drive game from the screenshot?
The JOE Friday Pub Quiz: Week 179
Brendan Gleeson's upcoming performance as Donald Trump is 'scary' and 'too close for comfort'
You may also like
7 months ago
Dublin photographer wins Best Overall Photo at 2019 Huawei Creatives
8 months ago
PICS: National Geographic announce the winners of the Travel Photo Contest
8 months ago
David Attenborough's cinematographer reveals where he thinks the most beautiful place is on the entire planet
1 year ago
Our guide to taking great photographs that don't need a filter
1 year ago
PIC: The funniest wildlife photo of the year has been revealed
1 year ago
An excellent music photography exhibition opens in Dublin in November
Next Page