These were the most-watched YouTube videos in Ireland in 2019

On the same day that Spotify dropped their 2019 Unwrapped feature - QUICK! SEE WHAT SONG YOU'VE BEEN LISTENING TO THE MOST! - YouTube have announced their 2019 Rewind, and the statistics specific to Ireland are... telling.

We've broken the top five down into the two categories; music videos and then pretty much everything else (that isn't published by a major music label). 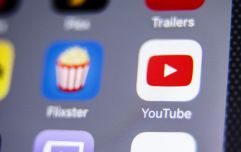 END_OF_DOCUMENT_TOKEN_TO_BE_REPLACED

On the music side of things, it skews pretty close to the Spotify 2019 lists that were announced earlier this week, but on the non-music video list, it seems that Irish people love watching Irish comedy as two of the top five on the list are from well-known Irish comedians.

The top five music videos were as follows:

Meanwhile, the top five most-watched (non-music) videos were as follows:

3. Could Have Been County - The 2 Johnnies

Clip via The 2 Johnnies

Clip via Foil Arms and Hog

5. Make this video the most liked on YouTube - Mr. Beast

popular
Varadkar: "There are two things we have to do... one is to bring wages up"
BBC trainee accidentally posts message mocking Man United live on TV
Second doctor accused of sexually assaulting patients at hospital in Kildare
Bruce Springsteen announces two nights in RDS in 2023
World's fastest passenger jet to take to the skies in 2025
Irish employment law experts warn employers must find ways for staff to take entitled leave
Galway named one of the top 10 best European cities to raise a family
You may also like
6 months ago
Cow escapes field, heads to resort and gets stuck on water slide
1 year ago
Mafia fugitive caught after police found his cooking videos on YouTube
1 year ago
Netflix making The Trial of the Chicago 7 free to watch on YouTube for 48 hours
1 year ago
'Banned' documentary about the Queen temporarily leaked to YouTube
1 year ago
YouTube to remove presidential election conspiracy theory videos
1 year ago
Here are the Top 10 most-watched music videos in Ireland in 2020
Next Page