Every single Irish football supporter can relate to these...

Ireland get their Euro 2016 qualifying campaign underway against Georgia on Sunday as Martin O'Neill's men look to reach the European Championships for only the third time in our history.

The road to France will definitely be bumpy and JOE looks at the 10 inevitable steps that will hopefully lead from the Aviva Stadium to Paris.

Sadly this is the most essential and frequently used characteristic that any Irish football fan uses especially given our heartbreaking record of qualifying for major tournaments.

If you want  to support a team that provides constant success and wins lots of trophies then we suggest taking a more active interest in our rugby boys or our terrific boxers, because a year in the life of an Irish football fan has more ups and downs than a fiddler's elbow.

Seriously, it could age you worse than 50 years of constant Fr Jack-esque drinking.

Irish supporters can all relate to the following; being beaten on the pitch, our dreams of a football holiday watching the lads in ruins and to make things worse all we hear for the next few months is how England are going to win the Euros/World Cup.

The shroud has fallen and Gary Doherty isn't the new Pele. I hate football, TV off. 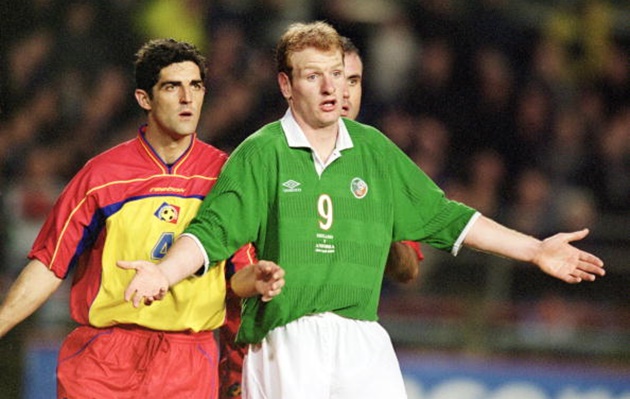 Ok, maybe I need to calm down a little bit because after careful thought our group was tough and we weren't a million miles away from qualifying.

So what went wrong? The team are too negative, we need a midfielder who can keep the ball and why the bejesus are we still playing hoof-ball with a 4-4-2 formation?

The inevitable passing of time means that we say goodbye to some legends of the green jersey. The summer weeks are usually filled by Irish fans desperately looking up Wikipedia to see what Premier League players have even the most tenuous grandmother link to us.

We're also fond of checking out our own U21's during these moments, especially so we can boast about that lad who scored three goals for Nottingham Forest in their Youth Cup 3rd round win against Peterborough.

I saw him play at Turners Cross two years ago you know? 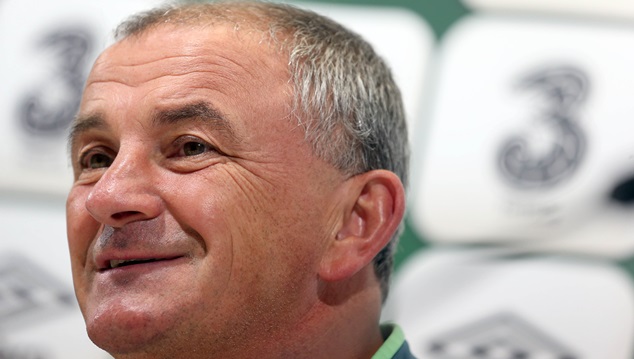 The qualifying draw for the groups of the Euros or World Cup is greeted by Irish fans like a ray of light that peeks through the dark depressing cloud that is a summers tournament without us.

Sadly it also gives us a certain degree of validation because we sometimes need reminding that we are in fact a footballing force despite the crushing disappointment of a few weeks back.

Once the draw is made the usual sentences include; 'Ah Jaysus, not Cyprus/Georgia again', 'I knew it would be Germany', 'It will be roasting out there and they'll have a bumpy pitch' and finally, 'Where the feck is Kazakhstan and do Ryanair fly there?' 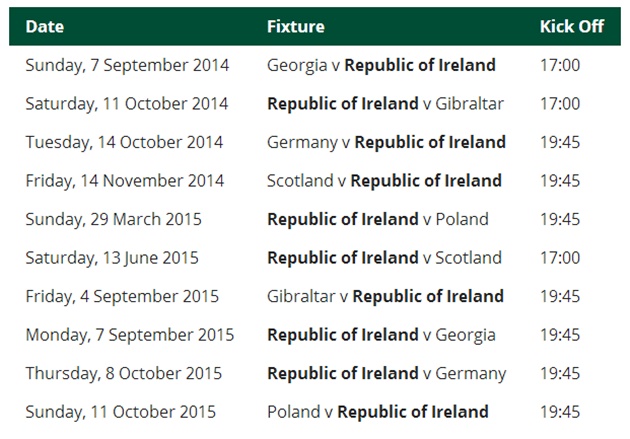 Irish fans have a peculiar relationship with international football tournaments on TV, it's almost masochistic.

We have an 'average' record of reaching major tournaments, we're usually competitive during the qualifying process but we will always get swept up in Euro/ World Cup fever despite our boys not being there.

The holy trinity in RTE tell us that this German team are passed it, Tiki-Taka is dead or that some imaginary centre-half is the weak link.

We take a perverse pleasure in watching how the top seed in our upcoming qualifying group performs over the summer weeks.

Case in point, I watched Germany in Brazil this summer and almost shat myself, it's not like they have Marco Reus to return against us or anything.

A new campaign brings about new optimism especially when it comes to the national team.

We read the back pages of the newspapers over the summer with great interest because we hope that our lads will get a move to a bigger club and play at a better standard.

This period is a vital time in the national team's prospects because we all want our players to be playing at the highest level possible.

We would love to see a situation where an Irish team is comprised of first team players from Europe's biggest clubs but that probably won't happen.

Over the last few years we've been bombarding Real Madrid and Barcelona to take a look at Darren Potter, Martin Rowlands and Joe Lapira but they just wont budge. 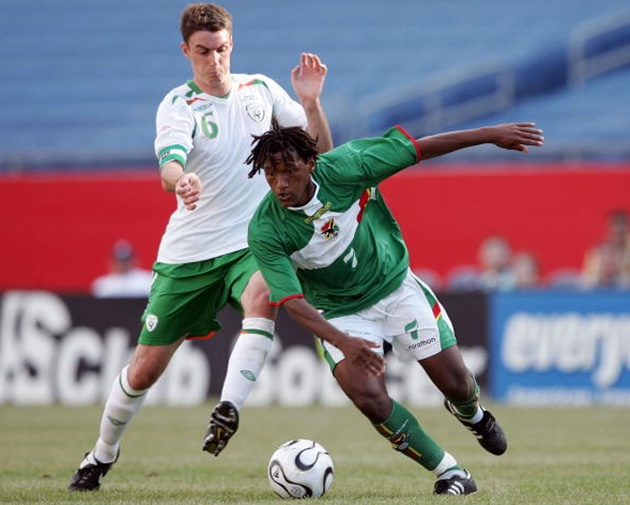 There are always two schools of thought on the opening qualifier.

A) It's always better to get the big boys early on and catch them on a World Cup hangover.

From the Euro '00 qualifying campaign on there have been times when this worked i.e. Ireland 2-0 Croatia '98, Holland 2-2 Ireland '00, Switzerland 1-1 Ireland '04 but it also failed miserably like Russia 4-2 Ireland '02 and Germany 1-0 Ireland (Stan getting sent off for starting a fight with a water bottle here)

B) Ireland always get a tricky away game first

This actually rings true when you look at the opening games from our last four campaigns. They were all away fixtures against Georgia, Armenia, Kazakhstan and Georgia again this weekend.

7) Pride away from home

One of the most frustrating things about being an Irish supporter is that we have played better away from home over the last 15 years than at home.

Let me refresh your mind with some of our really big performances/results over the last few years.

Backs against the wall, hostile crowds and a siege mentality seem to suit the Boys in Green. Compare this with...

Don't judge me but, apart from work commitments, I haven't missed an Ireland home match since '02. Trust me, they haven't always been pretty.

I remember Andorra taking the lead against us, the 'Keano, Keano' chants aimed at McCarthy in his final hours, throwing away a 2-0 lead against Israel, nervy wins against Macedonia and Georgia under Trap and the absolute pasting we took from Germany.

At least you can't say that being an Irish fan is boring.

I would wager that most Irish fans can vividly recall the painful memories of;

Those goals all still hurt as much as getting shot in the testicles with a nail gun.

There have been a few campaigns that were completely dead in the water with nothing to play for as Ireland entered the final round of games. The most recent campaign under Trapattoni springs to mind or Steve Staunton's reign of terror.

Ugh, the image of him in the managerial jacket still gives us the 3am shakes.

Despite these campaigns, Ireland are usually competitive as we enter the home stretch of the qualifying campaign and for every play-off heartbreak that's inflicted by Holland, Belgium, Turkey or some cheating Frenchman there is always Alan McLouglin's cracking volley, Jason McAteer's glorious winner, Aldo's nostalgic brace against Malta or that famous 4-0 win in Tallinn.

Whatever happens it certainly wont be dull. C.O.Y.B.I.G!

popular
One of the best movies of the decade has just been added to Netflix
20 years ago, one of the best sci-fi movies of the 21st century was a box-office bomb
Katherine Ryan says famous TV star is a ‘predator’ and everyone in industry knows
U2 drummer Larry Mullen Jr. says band may perform without him in 2023
Surprise frontrunner emerges as potential next James Bond as producers 'love him'
One of the scariest films of all time is among the movies on TV tonight
Prime Video has just added 26 very big movies to its library
You may also like
4 years ago
QUIZ: Can you remember the starting 11 from when Ireland beat Italy in 2016?
4 years ago
15 things that Irish football fans remember fondly about Poland and Euro 2012
4 years ago
FAI release never-before-seen footage of Wes Hoolahan’s most famous goal in retirement tribute
5 years ago
PIC: Man gets tattoo on his arse to commemorate that famous Robbie Brady goal
5 years ago
QUIZ: Name the Ireland team that played Sweden at Euro 2016 inside ONE minute
5 years ago
PICs: Shane Long's wonderful gesture to young fan after Euro 2016 defeat has only just been revealed
Next Page