Come on You Boys in Green...

Martin O'Neill's men resume their Euro '16 qualifying campaign on Saturday as UEFA new boys Gibraltar arrive at the Aviva Stadium. Nothing short of three points will do against the newest country in European football, especially since a trip to Gelsenkirchen to face the world champions Germany is just around the corner.

With this in mind here are 5 reasons we're looking forward to Saturday...

Who will play right-back?

O'Neill's preparations were dealt a serious blow with the news that the Everton duo of Seamus Coleman and James McCarthy were both ruled out of the double header.

There's no doubting that the Killybegs defender is our best player but an opportunity now presents itself for another man to stake his claim for the No 2 jersey.

It will be very interesting to see how Ireland line-up defensively because the most likely option seems to be moving John O'Shea to right-back. We imagine that this will mean Marc Wilson will be partnered with either Richard Keogh or Ciaran Clark in the centre of defence.

We can't see the back-four getting too tough an examination on Saturday but they'll definitely need the experience of playing together as a unit because it's more than likely that the same players will be facing up against Müller, Kroos, Schürrle, Götze et al on Tuesday.

David Meyler is also a decent option in to replace Coleman especially since the Hull City man deputised there admirably in the win against Oman. 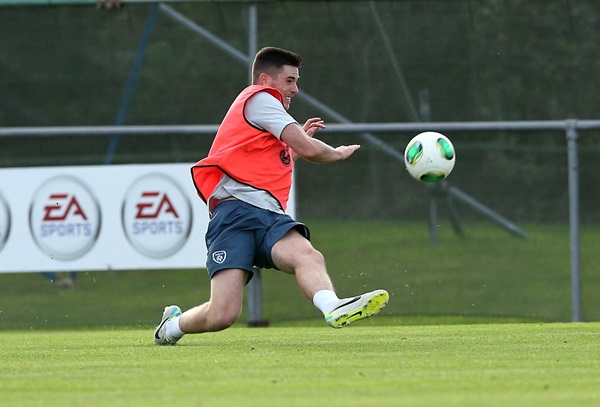 The cold truth about any qualifying campaign is that it's all about picking up three points in the end but a convincing win and performance on Saturday night will help ease the minds of most Irish fans.

The last resounding Irish win that we saw in Dublin was against a truly woeful Latvia side in O'Neill's first home game in charge but since then it hasn't been great. His record reads as played 9, W:3, D:3, L:3. Encouraging performances against Poland and Italy need to be measured against inept showings against Turkey and Portugal.

There were shades of the Kazakhstan smash and grab win under Trapattoni in our recent dramatic 2-1 win against Georgia but we're hoping for a more assured, composed and dominant performance on Saturday which should boost the players confidence heading into the Germany match.

Poland hit Gibraltar for seven in their meeting and while Ireland traditionally struggle to hammer any side, the players should be looking to lay down a marker here for the rest of the campaign.

Sweden, Austria and Germany all took points from their visit to Dublin in the last campaign so we need to make the Aviva a fortress.

This is what the three wise men made of our last performance.

No disrespect to Gibraltar but we think that it's extremely unnecessary for Ireland to be playing with two holding midfielders on Saturday.

While we're not advocating a gung-ho approach, painful matches against Liechtenstein, Cyprus and San Marino have showed us the perils of underestimating smaller countries, but the players should be controlling the possession and tempo of the game.

We imagine Gibson will be a like-for-like replacement for his teammate McCarthy but Stephen Quinn, although a decent performer in Tiblisi, doesn't offer the same guile or creativity that Wes Hoolahan can provide.

We imagine that Gibraltar will set their stall out to be stubborn, organised and hard to break down which is exactly why the Norwich City schemer should start.

Can Robbie Keane continue his recent run of goalscoring form?

While there are many parts of Shane Long's game that we admire, there is no denying that Robbie is still the best goalscorer that Ireland have.

Give him a chance and invariably the Tallaght man will take it. Keane is the highest currently active goalscorer in international football and his record haul of 62 goals in 135 appearances is simply amazing.

The LA Galaxy striker has been in brilliant form in the MLS and here's hoping that he can score some goals like this in front of the Irish crowd on Saturday.

The day and kick-off time is perfect for football fans

JOE will never complain about the timing of any football fixture but there is no denying that the decision to spread the Euro '16 qualifiers over the weekend rather than condensing them into the Friday is much better for football fans.

No more rushing from work, hurrying your drinks or being annoyed with mates that are stuck in grid locked traffic.

Football fans can enjoy the pick of Thursday and Friday's matches before making the trek to the Aviva to cheer on the Boys in Green at the vefry reasonable, and pub-friendly time, of 5pm.

That kick-off time also means you have just the right amount of time to get home to catch the later game in our group between Poland and Germany.

Tickets for the game are just €20 and can be purchased here.

The FAI are running a fantastic competition this week for two tickets to Saturday’s game against Gibraltar and a signed Ireland shirt.

Tell us your tales of epic journeys to watch Ireland play and the best story wins the prize! Visit their Facebook page and tweet with the hashtag #MakeTheMatch

popular
QUIZ: Can you score 12/15 in this difficult General Knowledge Quiz?
Weather advisory issued as temperatures in Ireland set to soar again
Family of Ashling Murphy share heartbreaking tribute at Fleadh Cheoil
The JOE Movie Quiz: Week 166
QUIZ: Can you name the movie from a single image?
QUIZ: Test your skills to the limit with this General Knowledge Quiz
The JOE Friday Pub Quiz: Week 306
You may also like
1 year ago
8 things we're going to miss seeing at our local St. Patrick's Day parade this year
2 years ago
11 painful things that people who work in retail will understand
2 years ago
16 classic toys that every Irish kid growing up in the '90s wanted
3 years ago
These are the 8 lies you tell yourself when you’re on a night out
3 years ago
PICS: These nostalgic images from the '90s will bring anyone back to their childhood
3 years ago
Pics: Every Irish '90s childhood summed up in these nostalgic images
Next Page