Bayern boss Pep Guardiola ditched his smart suit for more traditional German clothing as the Munich squad joined in with the Oktoberfest celebrations.

Known for his sharp attire on the sideline, Pep showed he really is getting in the cultural swing of things by donning the traditional hat and lederhosen yesterday.

It was Guardiola like we have never seen him before as the players and families had a day of celebrations following Saturday’s 1-1 draw with Bayer Leverkusen. Obviously they weren't celebrating getting a point against Sami Hyypia's side, but more joining in as the city goes Oktoberfest crazy. 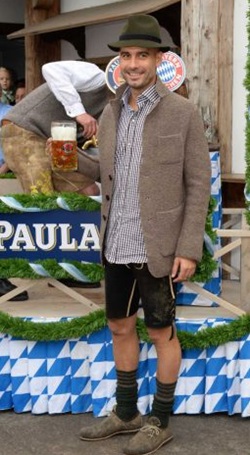 We’re not sure if Pep was keen on his squad to slug bag copious amounts of alcohol, but Bayern's chairman, Karl-Heinz Rummenigge, held a very relaxed attitude.

“Celebrate freely. Our next game isn't for another two weeks. We can enjoy the beer,” he said. 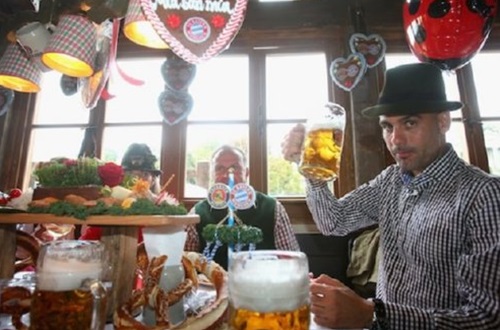 We have no doubt they did and with Friday's World Cup qualifier in Cologne looming we really hope the players heeded their chairman’s advice and then some.

The Big Reviewski || JOE · TBR Spotlight: Loki - Episode Two - 'The Variant'
popular
The JOE Friday Pub Quiz: Week 248
Three men arrested after reportedly attacking staff of premises on South William Street
WHO plan calls for preventing women of "childbearing age" from drinking alcohol
One of the most tense thrillers of the last ten years is among the movies on TV tonight
The 50 most iconic songs of all time* have been revealed
Five great new movies added to your streaming services this weekend
Met Éireann forecasts thunderstorms and temperatures of up to 20 degrees next week
You may also like
2 weeks ago
Americans offered free beer as latest incentive to get Covid-19 vaccine
6 months ago
5 craft beers to introduce you to the wonderful world of locally produced beer in Ireland
7 months ago
QUIZ: Can you name which country these beers are from?
1 year ago
Lidl selling non-alcoholic wine for €3 per bottle this Christmas
1 year ago
QUIZ: Can you identify the beer just from its can?
2 years ago
Guns N’ Roses file lawsuit over 'Guns ‘N’ Rosé' beer
Next Page