Students celebrating what it now an unofficial RAG week converged on the Supermac's in the Square, obviously with an hankering for taco fries after their bender. 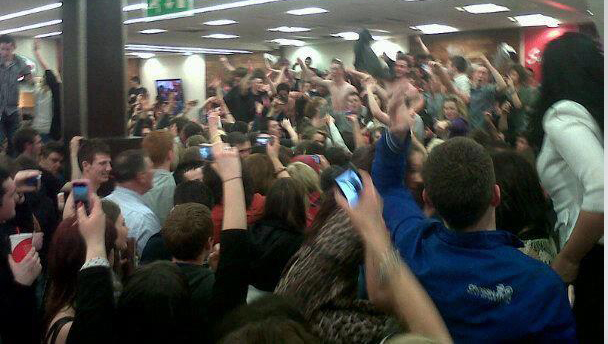 An unrecognisable Supermac's in Eyre Square

Those who couldn't get inside the fast food restaurant went mad outside and lit a flare, as you do. The video below shows just how exciting it can be when someone lets off a flare while you're off your tits.

According to the Galway Independent an agreement was reached at the start of the week. GMIT students agreed with their NUIG brethren's decision last October that cancellation of the event was the best idea.

But that didn't stop the students, most of whom ignore the Raise and Give part and mainly equate RAG week to an unbridled piss up. Facebook came to their rescue and they managed to organise an unofficial RAG week.

A number of youths were arrested in the city on Monday night as celebration began and Gardaí have warned there'll be more.

They Galway students are in good company, though. Their Waterford counterparts went on an epic takeover of the city last week. The future doesn't look so good for RAG weeks.

popular
A classic Western is among the movies on TV tonight
One of the most underrated sequels of all time is among the movies on TV tonight
The JOE Friday Pub Quiz: Week 300 - the Triple Century
Met Éireann gives update on weather warnings for this weekend
An underrated Jason Statham thriller is among the movies on TV tonight
The content warning for this week's episode of The Boys is incredible
The 50 most iconic songs of all time* have been revealed
You may also like
5 years ago
WATCH: This video showing 'hand-rolled ice cream' in Dublin is mesmerising
5 years ago
There's a new app that helps people find any food, drink or product they're looking for, locally
5 years ago
5 reasons why your business should 'pop-up' at one of Dublin's busiest stations
6 years ago
JOE BUSINESS: 3 great reasons you should pop-up in Dun Laoghaire this summer
6 years ago
This new app will help you keep track of the Luas strikes
6 years ago
TWEETS: Mixed reaction as Joan Burton steps down as leader of the Labour party
Next Page