The fact that the West Brom striker has 43 caps for Ireland and 10 goals since making his international debut six years ago might make this scenario unlikely.

The Tipperary man was in top form last night in the Monday Night Football and his opening goal in the 2-2 draw with Aston Villa is as good an individual goal as you will see anywhere.

After finishing with two goals and a real thorn in the Villa defence, it was only natural that the reaction on Twitter, which often tends to be knee-jerk, was fulsome in praise for the former Tipperary minor. However, some obviously are blissfully unaware over his career thus far, with some suggesting an England call-up in light of his blistering performance. 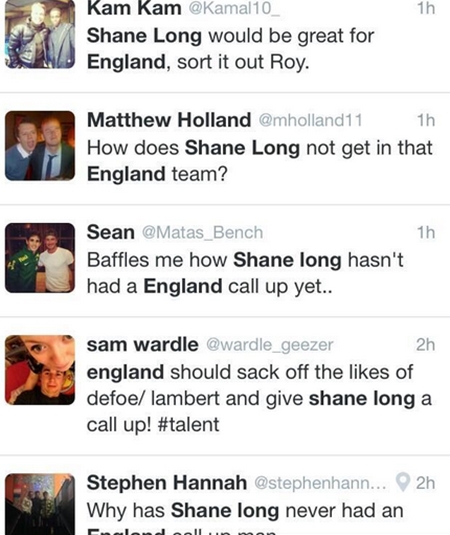 Just as a reminder to anyone in doubt, here is that headed goal against England in Wembley from earlier this year.

popular
Details of cash payments and Christmas bonus outlined in Sinn Féin’s alternative budget
QUIZ: Test your knowledge with this Ultimate Friends Character Quiz
The JOE Friday Pub Quiz: Week 313
A brilliant psychological thriller is among the movies on TV tonight
House Of The Dragon is already better than Game Of Thrones
One of the best films nobody went to see turns 15 years old this week
QUIZ: How well do you know your horror movie scream queens?
You may also like
4 years ago
WATCH: Shane Long gives incredible rendition of Ed Sheeran song at Robbie Brady's wedding
5 years ago
WATCH: Gentleman Shane Long makes young Irish fan’s day with special treat before Serbia game
5 years ago
PICs: Shane Long's wonderful gesture to young fan after Euro 2016 defeat has only just been revealed
6 years ago
PICS: Shane Long's beautiful home and his lovely family are the talk of Twitter
6 years ago
WATCH: You'll be able to get a look inside Shane Long's gaff tonight on TV3
6 years ago
WATCH: Shane Duffy singing 'Shane Long's on Fire' at a karaoke night in Derry is superb
Next Page