Carlos Tevez shows up overweight for pre-season with Juventus

He's only been on holiday for a few weeks after ending the season with Manchester City, but Carlos Tevez has managed to show up completely out of shape for his medical with Juventus

Carlos Tevez is already proving to be a bit of a headache for his new manager Antonio Conte despite just signing for Juventus a few weeks ago, after he showed up out of shape for pre-season training.

The fiery Argentine is said to be at least 6kg over the ideal weight, and we must admit he doesn't have the ripped physique we were expecting from a top footballer while undergoing his medical here. 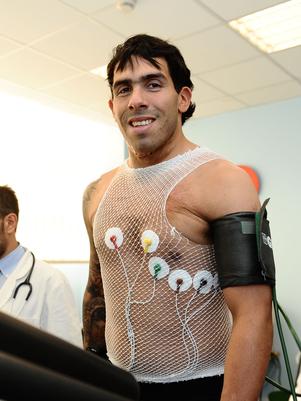 According to Gazzetta dello Sport Conte has some pretty strict regimes by all accounts, so expect to see a very fit Tevez come September. Talk about making a good first impression anyway...

Hat-tip to terra.com.br for the pic

The Big Reviewski || JOE · TBR Spotlight: Loki - Episode Two - 'The Variant'
popular
Two teenagers die in separate incidents in Dublin and Waterford
British Government to introduce Irish language act in Northern Ireland by October
Richard Madeley goes full Partridge with Hitler Youth reference on Good Morning Britain
QUIZ: You won't be able to guess all these brands from their slogans
Public warning issued as large male boar is on the loose in Kerry
There are four big movies arriving in Irish cinemas this week
QUIZ: Take on this tasty challenge of your General Knowledge skills
You may also like
5 months ago
Everton v Man City tonight postponed due to coronavirus outbreak
1 year ago
Here's how to get tickets to Coca-Cola's last Premier League roadshow
1 year ago
They're making a cartoon show about Manchester City for some reason
1 year ago
QUIZ: How well can you remember the 2018/19 Premier League season?
2 years ago
QUIZ: How good is your memory of the Manchester derby?
2 years ago
The Football Spin on Maurizio Sarri's problems and have Chelsea handed Manchester City the title?
Next Page