Carlow hurlers and footballers get their 2013 Championship underway this weekend and both teams will be sporting anti-suicide logs on their jerseys.

The Carlow County Board has taken the commendable step by placing the slogan – 'Suicide Aware: Living is Winning' – on the back of their shirts when they take on Westmeath and London respectively in the Leinster championship.

In a week where young Donal Walsh, an avid anti-suicide campaigner lost his own personal battle, it seems particularly fitting that Carlow should further raise the awareness of the issue and football selector Adrian Corcoran has said it is an issue which has affected the county greatly.

“Like a lot of counties Carlow has been affected by this issue and, with so many young men involved in the GAA, our county chairman felt that the change of rules about logos gave us a great opportunity to send out a positive message to them,” he said in today’s Irish Independent. 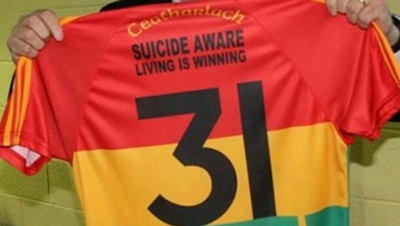 The jersey being sported this weekend by Carlow sides

It comes hot on the heels from RTE pundit Joe Brolly having persuaded several other counties to do the same thing for the organ-donation cause he is now championing, including the Kilkenny hurlers.

Great to see the GAA addressng such important issues.

The Big Reviewski || JOE · The Big Reviewski with Dune, a mini-Hangover reunion & the best of Timothée Chalamet
popular
The JOE Friday Pub Quiz: Week 266
Here's the line-up for tonight's episode of The Graham Norton Show
Alec Baldwin expresses "shock and sadness" over fatal film set shooting
HBO announces a new Sopranos series is in the works... kind of
Hunger strike ends as Nadim Hussain assured he won't be deported
‘If You Go, Go Slow’ - HSE launches new campaign urging people taking drugs to do it safely
Nightclubs are now ticket-only events, according to new measures
You may also like
5 years ago
WATCH: This video showing 'hand-rolled ice cream' in Dublin is mesmerising
5 years ago
There's a new app that helps people find any food, drink or product they're looking for, locally
5 years ago
5 reasons why your business should 'pop-up' at one of Dublin's busiest stations
5 years ago
JOE BUSINESS: 3 great reasons you should pop-up in Dun Laoghaire this summer
5 years ago
This new app will help you keep track of the Luas strikes
5 years ago
TWEETS: Mixed reaction as Joan Burton steps down as leader of the Labour party
Next Page