Championship Preview: Kilkenny and Tipp put their All-Ireland credentials on the line

The two main contenders for Liam McCarthy will get their 2013 campaigns underway in what is a busy weekend.

The Gaelic Ground, Wexford Park and O’Connor Park will witness six sides get their first championship run, while the bookies favourites for the All-Ireland will be without their marquee forwards.

Of course only counties such as Tipperary and Kilkenny could make do with losing players of the calibre of Lar Corbett and Henry Shefflin and not be severely depleted.

Here is a look at the four games this weekend.

A disappointing season for the Dubs in 2012 and a big defeat to Tipperary in the league semi-final has meant that expectations in the capital are lower this year than they have been for the past few seasons, which will suit Daly just fine.

The Dubs have got the better of Wexford twice already this year and while the Slaneysiders have only won one Leinster championship game since 2009, Liam Dunne will be quietly confident of holding their own in front of the home supporters.

Lee Chin will be a key figure in the Wexford midfield less than 24 hours before togging out for the footballers, while Rory Jacob and Jack Guiney will be key figures in attack.

Verdict: Should be closer than many expect, but Dublin to prevail by a score

The task facing Offaly is a daunting one and in all honesty, a good performance rather than a win is what we would expect in O’Connor Park on Sunday. However, they have been given the fillip that for the first time since June 1999, the Cats will be taking to the field without Henry Shefflin in a championship encounter. 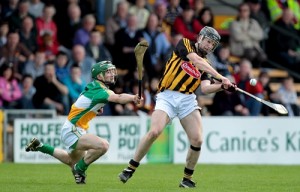 However it’s not like they will be short firepower and TJ Reid is now back in the fold, they will look to continue where they left off against Tipp in the league final. If they play to those same heights then the gap between the two sides should be comfortable from a Kilkenny perspective.

Ollie Baker will give corner-forward Sean Cleary his championship debut, while the bulk of the scores are expected to come from the gifted Joe Dooley.

Verdict: Kilkenny to win by 6 – 8 points

While Clare and Waterford was an enjoyable encounter for the neutral last weekend, the game failed to really ignite and we expect the full cut-and-thrust of the Munster championship to ensue at the Gaelic Grounds at 4pm on Sunday.

Limerick gave Tipp an almighty scare in this fixture last year and lead by seven points at one stage with a shock victory on the cards. However it wasn’t to be and few expect John Allen’s men to lower Tipp colours this year either.

Lar Corbett is still out after the most famous rib injury in GAA history, while Eoin Kelly will be used as an impact sub. Kieran Bergin, a late bloomer to inter-county hurling gets his championship debut at wing-back after an impressive spring and Eamon O’Shea has his team motoring nicely after the troubles that plagued the Premier last year.

John Allen has made some bold decisions by leaving some bigger names on the bench as he lays a marker down, but Limerick will do well to send their supporters home with a win under their belts.

Verdict: Tipp to prove too strong

popular
The Last Of Us Episode Five will premiere days earlier in Ireland and UK
Amazon Prime Video has just added 21 big movies to its library
Shock as blues singer beats Adele, Beyonce and Taylor Swift to win Song of the Year Grammy
5 years ago, Hollywood took a massive gamble on a huge sequel... and lost big time
Ben Affleck's bored expression at the Grammys becomes a meme
One of the best crime thrillers ever is among the movies on TV tonight
One of the most underrated crime thrillers of recent years is among the movies on TV tonight
You may also like
1 week ago
Leo Varadkar says alleged assault on migrant camp in Dublin has the 'look of' a racist attack
1 week ago
This is what the cheapest house for sale in Dublin looks like
1 week ago
NTA publish €25bn plan for new Luas lines and Metrolink in Dublin
1 week ago
Three injured after fight breaks out at refugee centre in Dublin
2 weeks ago
Investigation launched after burglary at Hugo Boss store on Grafton Street
3 weeks ago
'Life changing' €1 millon lotto ticket sold in Dublin
Next Page