It was a day full of surprises as Offaly put four goals past Kilkenny before their class shone through, Limerick upset Tipp, Wexford footballers advanced to a provincial semi-final as did 14 man Monaghan.

Limerick hurlers did what they threatened to do last summer and caused a huge upset by defeating Tipperary at the Gaelic Grounds today.

Played in sweltering conditions, Limerick had not tasted a Munster victory since 2007 but did not play like a team with an inferiority complex.  Sean Tobin goaled after 19 minutes and the Treaty side led by 1-07 to 0-07 at the break.

On the resumption, substitute John O’Dwyer really made his mark on his championship debut. He hit 1-3 from play in the first 15 minutes of the second half and would end up as Tipp’s goalscorer.

Limerick however never crumbled. Declan Hannon was prominent throughout and even allowing for a couple of wayward frees, showed composure in the dying stages, along with Shane Dowling and captain Donal O’Grady who chipped in with some crucial scores.

Lar Corbett and Eoin Kelly were introduced from Tipp, but they could not rescue the game for the Premier and eventually lost out on a scoreline of 1-18 to 1-15.

The qualifiers now beckons for them but for John Allen’s side they will be in a Munster Final for the first time since 2007 and given the nature of their performance, particularly in the final 15 minutes, will fancy their chances against either Cork or Clare.

Monaghan through to Ulster semi-final

Fourteen-man Monaghan brushed Antrim’s weak challenge aside with alarming ease to set up an Ulster SFC semi-final against either Fermanagh or Cavan.

The Farney men haven’t lost to Antrim in the championship in four decades and never looked like doing so today and even with Monaghan defender Neil McAdam sent to the line after a second bookable offence, the home side could only muster one subsequent point in front of their supporters at Casement Park. 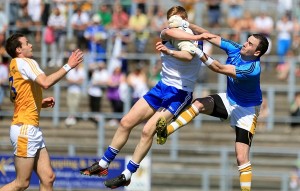 If it was to be the last game at the venue before redevelopment, it wasn’t a fitting send-off as the game lacked real quality with Monghan wasteful in front of goals and could well have won by a greater margin, kicking 10 wides in the second half alone.

Conor McManus was their top scorer with four points, three from frees while Tommy Freeman came off the bench and scored from a tight angle, but manager Malachy O'Rourke will know there is room for improvement on what is deemed the easier half of the Ulster draw.

Wexford footballers made it a satisfying weekend for the county with narrow 2-13 to 1-15 in a thoroughly exciting game in Drogheda.

The Slaneysiders had the better of the first half, with a Ciaran Lyng goal helping the visitors to a 1-10 to 1-05 interval lead against a Louth side that had been so impressive in their first championship outing. 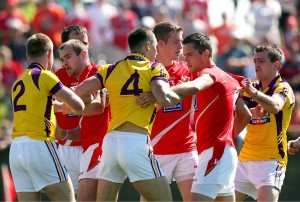 Louth made a spirited second half comeback, but were not helped by the red card shown to defender John O’Brien late on.

Ben Brosnan hit some important frees and it was Brian Malone who hit the dramatic winner and they will now face Meath in three weeks in Croke Park in the provincial decider.

Offaly gave a good account of themselves in front of their home supporters at O’Connor Park, but ultimately came up short against All-Ireland champions Kilkenny who advance to a Leinster semi-final.

Brian Cody will have plenty to ponder about after his side went in at half-time after scoring just two points from play in the opening 35 minutes and at the end of 70 minutes conceded four goals, including an early contender of goal of the season from Joe Bergin. 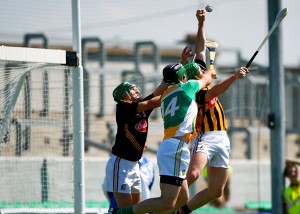 Joe Bergin's second goal wasn't as eye-catching as the first

However after the break the Cats upped the ante and Eoin Larkin punished an Offaly defence creaking under increased pressure by giving away frees. Larkin scored 10 frees in total and another from play, while Joe Bergin, Shane Dooley and Colm Egan getting 3-7 of Offaly’s total of 4-9.

Ollie Baker will take great heart from the spirited performance and if that first half form can be replicated in the qualifiers they will be a handful for anyone.

The Big Reviewski || JOE · The Big Reviewski with Andy Serkis, Squid Game follow-ups & the return of Succession
popular
The JOE Friday Pub Quiz: Week 265
Ryanair is seeking applicants for "the worst job in Ireland"
Here's the line-up for this week's episode of The Late Late Show
National Lottery reveals 28 locations where tickets worth over €35,000 each were sold
Ed Norton's superb debut performance is among the movies on TV tonight
The 50 most iconic songs of all time* have been revealed
Unusual summer temperatures are on their way this weekend
You may also like
5 days ago
Wicklow GAA to investigate fight after Under 15 match on Saturday
1 year ago
Post-match celebrations and a lack of social distancing at certain events put club game on hold
1 year ago
Cork GAA pleads with clubs and supporters “not to engage in celebrations that breach current guidelines”
1 year ago
What's the Bronco test and why it may come up in conversation this week
1 year ago
The Andy Moran GAA Isolation Workout
1 year ago
SuperValu, Centra and the GAA team up on initiative to support elderly people
Next Page