Without doubt one of the most popular players with Manchester United fans, Paul Scholes spent his entire professional career at Old Trafford. In over 700 games, spanning 18 years, the ginger midfielder served up beautiful passing, stunning goals and shocking tackles with remarkable consistency before he retired at almost the same time as Alex Ferguson quit the club last season.

But if you ever wondered what it was like to be Roy Keane and play alongside Scholes, then this eBay auction is for you. Stalybridge Celtic Juniors FC are running a fundraising ‘Coaches v Dads’ match which would not normally be of global interest but when one of the dads is Paul Scholes, things change.

Scholes’ son is on the Under 14s at Stalybridge and the club hit on the idea that perhaps a United fan would pay for the privilege of 45 minutes playing alongside one of their heroes. 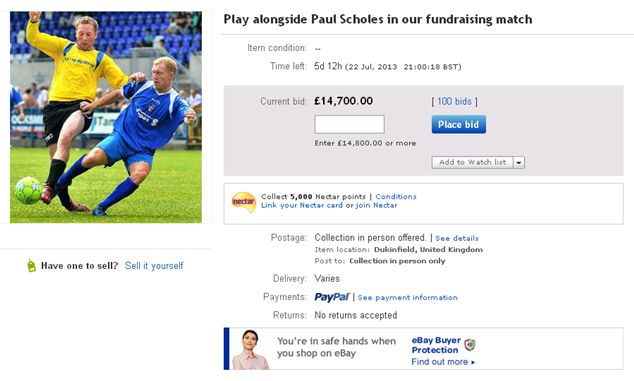 That guess was correct and after the bidding started at just £10 initially it is now up to the ridiculous level of £14,700 (€16,896). There is still five days left in the bidding so who knows how high it will go.

If you have a shed full of cash and love the man they call they call Scholesy, click here to bid.