Darren O'Dea on leaving Ukraine: “There are more important things in life than a contract."

Darren O’Dea has described the unrest in the city of Donetsk that prompted him to leave Ukraine and become a free agent.

The former Celtic defender lived at the Metalurh Donetsk training ground with his fellow players during the second half of last season, as the conflict between Ukrainian and Russian separatists raged around them.

O’Dea told the BBC how – during the trip to an away match in Crimea - machine guns were pointed at him and other players who had stepped away from a team bus to use some nearby toilet facilities.

"They were going ballistic," O'Dea said. "A lot of people got involved and it was hostile and intense, but also surreal."

While the 27-year-old returned to his team-mates for three weeks last month – having spent some time recuperating from injury in Scotland – he knew that he had to negotiate the end of his contract and leave the region.

"Where the team is now based, you could call it a holiday resort, but it's not a place where you'd ever want to go on holiday. Donetsk is a no-go place at the moment.

"The town has been completely taken over by pro-Russian [forces], so as far as I know our training ground has been taken over. Lads' cars have been taken off them, whatever was left there is now the [soldiers'], they go into shops and take clothes and food as they please.

"I came to a decision [because] I can't see how things get much better in the near future. [Metalurh] understood where I was coming from, that I can't live without my family, so we came to an agreement for me to leave. They wanted me to stay, but it was impossible. It's tough enough for me to live in Ukraine as it is, but to live in those conditions made it impossible.

"The best thing to come out of Ukraine for me was the financial side of it. I've taken a risk, because I had a two-year contract in front of me, but after I'd seen the conditions and having been there, it was never in my head to stay.

“There are more important things in life than a contract. I'm at a stage in my life where I'm looking to get back to normality, so things maybe worked out for the best." 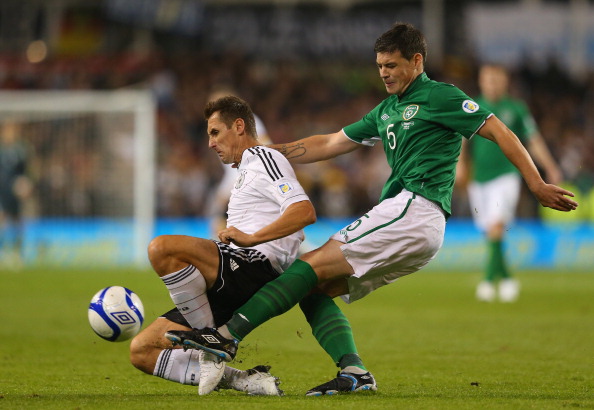 O’Dea is now on the market and, as he is not affiliated with any club, can move anywhere.

He has never truly settled at any club since leaving Celtic, having had spells at Reading, Ipswich, Leeds United and in Canada with FC Toronto.

The Dubliner says he is hungry to attract a club in the United Kingdom but admits it could be tough after his time away.

"If I can find the right club, for a long-term thing where I can settle down, that would be ideal,” O’Dea said. “If it came to it, I'd be comfortable taking a short-term thing. I've been out of sight and out of mind in the UK, which can be an issue, but if I have to prove that again so be it, I'm hungry to do that.

"For the last five seasons I've had regular football, it's just that I've moved. I got offered a deal at Leeds - I was looking at houses down there, it was a three-year deal and they changed their mind. It was very strange.

"Then I went to Toronto, was made captain, it was a fantastic place to play, but the way my contract was built they had to change it to fit within the salary cap, so I decided it was better to move. Then it was Ukraine and a war kicks off. The next decision I take I won't rush into.”

popular
QUIZ: Test your knowledge with this Ultimate Friends Character Quiz
House Of The Dragon is already better than Game Of Thrones
The 50 most iconic songs of all time* have been revealed
The JOE Friday Pub Quiz: Week 313
QUIZ: Name the country for each of these non-capital cities
Amazon Prime Video has just added 20 very big movies to its library
People think they've figured out the ranking of the viewers on your Instagram Stories
You may also like
1 week ago
Editor-in-chief of Russian newspaper has mysteriously 'suffocated' on business trip
2 weeks ago
Ukraine honours pensioner with medal after claiming he shot down a Russian warplane
2 weeks ago
Vladimir Putin awards murderer with medal "for courage" after he is killed in war
4 weeks ago
Russia has put Europe one step away from "radiation disaster," says Zelensky
1 month ago
Darya Dugina, daughter of Putin ally, dies in car bomb attack in Russia
1 month ago
Sabina Higgins condemns "illegal" Russian invasion of Ukraine following backlash to letter
Next Page