If he rang 666 he might have had a better chance of getting through (just joking Fergie and Man United fans).

Manchester United fans have had plenty of reasons to get angry of late and they would have been fuming once more last night after a limp exit out of the Capital One Cup after losing to Sunderland on penalties (terrible, terrible penalties) at Old Trafford.

One fan was so enraged, it turns out, that after having a few drinks, he dialled 999 and demanded to talk to former boss Sir Alex Ferguson about the latest in a series of bad results. 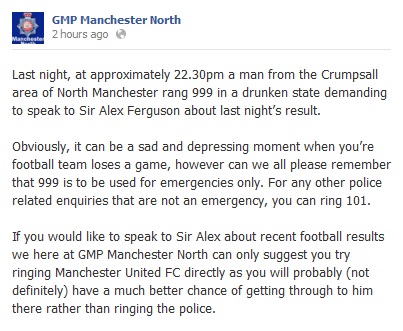 … and, unsurprisingly, it prompted a number of amusing comments underneath, with suggestions that it was David Moyes himself that made the call, that the caller should be given a ‘penalty’ charge or that he was calling in request of ‘Fergie Time’.

Audio has since emerged of the phone call and despite being warned early doors that he was ringing the wrong number to get his feelings about United off his chest, he persisted with his complaints about a United team he said was 'knackered' before, in fairness to him, reacting fairly calmly when the lady at the other end of the line told him she was going to cut him off.

It’s a reflection of how desperate United fans have become at this stage, but at the same time, it’s something that should put a smile on their faces, something that's badly needed at present.

popular
QUIZ: Can you name all the counties in Ireland without the letter 'E'?
WhatsApp introduces way to choose who can and can't see you're online
Nearly 100 flights delayed at Dublin Airport on Monday
QUIZ: Can you get top marks in this short but tricky Irish geography quiz?
Netflix has just added an incredibly tense 97-minute thriller
RTÉ tries to solve Michael Collins murder in new documentary
Two long-thought-dead Marvel projects appear to be in the works
You may also like
2 months ago
BBC trainee accidentally posts message mocking Man United live on TV
1 year ago
COMPETITION: WIN a copy of Eric Cantona's new Manchester United documentary, The United Way, on DVD
1 year ago
Manchester United documentary written by Eric Cantona available to watch at home in Ireland this May
1 year ago
Marcus Rashford launches book club to help kids experience 'escapism' of reading
1 year ago
Paul Pogba releases powerful statement in response to 'fake news' from The Sun
1 year ago
The JOE Pub Quiz: Week 214
Next Page