The gaffer at Parkhead has made some pretty shrewd moves in his time in the hot seat. Here’s what we reckon are his best five.

Ahead of the Dublin Decider between Celtic and Liverpool, we thought we’d take a look at some of the smarter bits of business conducted by the managers. First up is Neil Lennon.

Signed in Lennon’s first transfer window in the summer of 2010, the striker cost £2.4million, but it proved to be money very well spent. Hooper scored 82 goals in three seasons for the Bhoys – he was top scorer each season - before being sold to Norwich this summer for £5m, turning the club a nice profit after three very successful years.

The keeper first arrived at Celtic in the summer of 2010, on loan from Newcastle. Over his first two seasons, the English stopper was quickly made the Number 1 and kept a very impressive 50 clean sheets in 91 games. 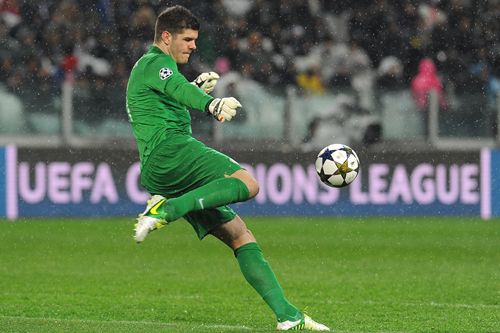 Finally signed on a permanent basis in the summer of 2012, for a fee of around £2m, Forster was magnificent in the famous victory over Barcelona in the Champions League, a performance that ensured he earned a call-up to the England squad.

There was talk of a move away from the Scottish champions earlier this summer but that seems to have died down, which is great news for Celtic fans.

A free transfer from Cardiff in 2010, the midfielder settled in quickly to life in Scotland and soon became a fixture in Lennnon’s teams. Scoring the winner in an Old Firm game back in 2011 was probably the highlight so far (skip to 3.20 in the below video) and with two SPL titles and two Scottish Cups to his name since he arrived, he hasn’t done too bad.

Picked up for £500,000 in the January window of 2011, the striker has scored lots of goals and important ones at that, for the Glasgow club. As well as scoring on his debut, Commons developed a happy knack of scoring against Rangers, scoring against their rivals in the League Cup and the SPL. A difficult 2011-12 season was followed by much better form last term, including the winner in the 3-2 win over Spartak Moscow in the Champions League.

The striker also scored the vital goal last night as Celtic won 1-0 in the Champions League Third Qualifying Round first-leg win over Elfsborg, nudging the side closer to another run in Europe’s top competition.

A complete unknown to most football fans when he signed from Beerschot AC in Belgium in the summer of 2011, the fee of £900,000 might be the smartest money Neil Lennon’s ever spent.

The Kenyan immediately endeared himself to the fans by taking the number 67, in honour of the Lisbon Lions but he backed up their faith with sterling performances on the pitch.

A powerhouse in midfield, with an eye for the spectacular goal (see above), Wanyama was superb in the Champions League last season and after a lot of interest from English clubs, he was sold this summer to Southampton for a fee rumoured to be £12.5m. Celtic will miss his talents, but that’s a seriously good profit to turn in just two years, and it should fund Celtic’s summer 2013 purchases.

popular
Amazon Prime Video has just added 16 big movies to its library
QUIZ: We bet you can't get full marks in this extremely frustrating geography quiz
"It will be with me until I die" - Charlie Bird opens up about "loveliest gesture" from Daniel O'Donnell
One person killed and three wounded in lecture hall shooting in Heidelberg
WATCH: The trailer for this celebrity murder mystery improv comedy looks incredible
A new law now prevents employers using tips to ‘make up’ rates of pay on contracts
Ireland tells Russia that naval exercises off Irish coast are "not welcome"
You may also like
2 months ago
Police issue warning over CCTV footage of Liverpool bomb explosion
2 months ago
Liverpool bomb declared a terrorist attack as police confirm fourth arrest
2 months ago
Liverpool bomb: Taxi driver "locked bomber inside car" after spotting explosives (Report)
1 year ago
Gini Wijnaldum shares his favourite gym exercises for building abs of steel
1 year ago
Armed police close gym near Liverpool after owner refused to shut doors
1 year ago
Jurgen Klopp sends brilliant letter to 10-year-old Manchester United fan from Donegal asking him to stop winning
Next Page