The JOE experts have a little help from eircom ambassadors Mickey Harte, Michael Murphy and Donie Shine when previewing this weekend’s games, while we also look back on how our win, lose and draw predictions are going so far.

Your humble author was walking with a bit more of a spring in his step around JOE Towers this week after correctly predicting all four of the winners in last week’s round of Championship matches, but knowing that arrogance can often prime a man for a big fall, my feet have firmly been planted on the ground ahead of what will hopefully be another successful spot of forecasting this weekend.

If you enjoyed similar success as far as your predictions were concerned, you’re probably riding high in the eircom Win, Lose or Draw game, which allows entrants to put their Gaelic Football knowledge to good use to try and win a pair of All-Ireland Final tickets.

If you haven’t already done so, meanwhile, remember that you can also go up against JOE readers and the GAA heads in the JOE office by entering the JOE league. Simply click on this link, and you’re away.

Now, with the help of some of the most well-known figures in the game, here’s how we think this weekend’s games are going to go down.

Speaking about going down, Down will be doing their utmost to prevent themselves from going down to Donegal down in Breffni Park, but all logic points to a victory for the reigning Ulster and All-Ireland Champions.

Numerous observers tipped Tyrone to cause an upset in Ballybofey first time out but any doubts about Jim McGuinness’ men were cast aside in emphatic fashion as the men in green and gold steamrolled their way to a victory that suggested they might be an even better side this season.

Down showed plenty of fight to battle back in a humdinger of a game against Derry at Celtic Park but while their attacking unit is very impressive indeed, they are far from watertight at the back and if they don’t contain Murphy, McFadden, McBrearty et al, you wouldn’t fancy them to beat Donegal in a shootout.

We expect Down to put it up to Donegal early doors as they did in the Ulster Final last year, but we also think Donegal will pull away and win with a fair degree of comfort in the end.

Donegal captain Michael Murphy is backing Down. Only kidding, Donegal all the way: “Derry v Down was a fantastic game, it was really open and both sides brought their ‘A’ game to the table,” Murphy said.

“There were a number of fantastic scores and it’s gone down thus far as one of the games of the championship. We obviously knew we were going to be playing the winners and Down came through – they’re a Division One side like ourselves but were also relegated like ourselves.

“They’ll be coming into it full of confidence. They still have a number of players off the back of the 2010 All Ireland Final and they’ve added a couple of players to that side also. It’s a big, big game for us but it’s one we’re looking forward to.”

Tyrone manager Mickey Harte, meanwhile, is going for Donegal. “Like the rest of the country, you’d be fancying Donegal, because they’re the All Ireland Champions,” Harte said.

“They’ve the first round behind them, they seem to have carried on from where they left off last year and despite the fact that there might be question marks around the fitness of Karl Lacey and Neil Gallagher, I still think they’ll have enough power within them to take Down.

"Down, on the other hand, will have gained a lot from their victory over Derry. It was a very open game and they managed to score 2-17 but they’ll be lucky to get half of that on Sunday. Would that be enough to beat Donegal? I don’t think so.”

Even though facing a rampant Mayo in the decider is an ominous prospect, Sunday’s clash in Carrick-on-Shannon is a huge game for both sides because this kind of opportunity to reach a Connacht Final probably won’t roll around again for a long time.

The novelty of the encounter is bound to attract a lot of interest – the Queen herself was invited after all – and many are tipping London on the basis of their incremental improvement under Paul Coggins, the growth of the game in London in recent years and also the unrest in the Leitrim camp which saw four players dropped from the panel for breaches of discipline only a few weeks ago. 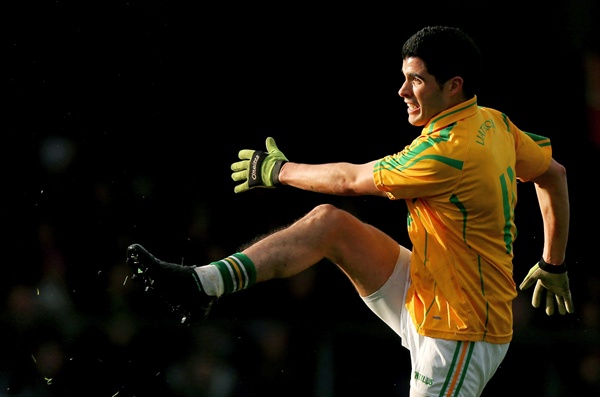 After he scored 3-7 against New York, London will need to keep an eye on the deadly Emlyn Mulligan

That said, Carrick-on-Shannon has proved a tough place for opposition teams to go over the years and in Emlyn Mulligan they have a sharpshooter who would make most inter-county teams in the country. While London’s win over Sligo was a brilliant achievement, it was also their first win in the Connacht Championship in over three decades and they may find themselves struggling to deal with the level of expectation hovering over them going into Sunday’s game.

We fancy Leitrim to prevail by a few points.

"They’d a good league campaign and a good FBD so they’re coming into it in a strong position. There have been rumours of a bit of trouble in their camp so with London overcoming Sligo it’s going to be a tight in Páirc Sean MacDiarmada. I wouldn’t be surprised if London did it but you’d have to fancy Leitrim to come through."

Mickey Harte is opting for London: "You’d have said home advantage for Leitrim would put them in pole position but the fact they’ve lost four players makes it a very level playing field – take four players from any squad that would be playing and it weakens your team. Both teams have played their league football in the same division so it wouldn’t be beyond the realms of possibility for London to make history and reach the Connacht Final.

"By a slight head I’m going to go for London."

"With Leitrim having the home venue and a Connacht final at stake, you’d look at them to come through," Murphy said.

"The loss of a number of players through disciplinary issues could galvanise them and bring them together also. With the confidence on the back of the Sligo win, London will feel like they’ve nothing to lose and they’ll definitely get stronger over the next couple of years. It wouldn’t surprise me if it’s this year but I just think home advantage could tip it in Leitrim’s favour."

popular
Budget 2023: Cigarettes going up, energy credits announced, child and social welfare increases confirmed
CONFIRMED: Renters to benefit from €500 tax credit as part of Budget 2023
Two new 24-hour bus services are coming to Dublin
Female child and woman in critical condition after incident in Clare
An underseen disaster film is among the movies on TV tonight
Female child discovered with serious injuries in Clare
Five men arrested in connection with fatal assault of Dylan McCarthy
You may also like
3 weeks ago
Roscommon GAA confirms investigation into alleged assault on referee during juvenile game
2 months ago
Looking for a hotel room for the All-Ireland Final weekends? It won't come cheap...
3 months ago
Taoiseach condemns "disturbing" fight at Galway v Armagh game
4 months ago
The 2 Johnnies share unbelievable catfish ordeal affecting over 40 people
4 months ago
Limerick hurler arrested following alleged altercation with Tipperary player in Limerick pub
5 months ago
Woman in her 20s dies after accident during Camogie match
Next Page