A huge number of golf enthusiasts flocked to Carton House this weekend to watch the Irish Open and Enda Kenny was among those up close and personal to the action.

On a big weekend of sporting action, the Taoiseach was among those watching some of Europe’s finest golfers battle it out, with Paul Casey landing the top prize and Shane Lowry the best of the Irish.

And judging by the picture sent into us by Cathal O’Sullivan on Twitter, Enda was determined to get the best seat in the house. 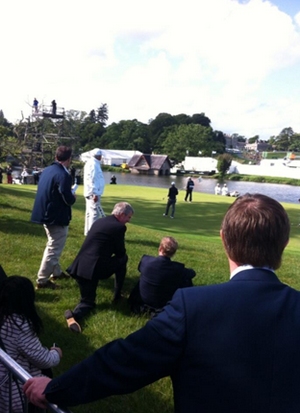 Casey won his first tournament in over two years to finish 14 under, including a  stunning 45ft eagle on the final hole to finish ahead of overnight leader Joost Luiten and Robert Rock and Lowry best of the Irish at eight under.

The Fine Gael leader may also have picked up a few tips to help his own game.

popular
The JOE Movie Quiz: Week 102
Leo Varadkar says cyber attack on Department of Health was "unsuccessful"
Ryanair set to take first delivery of "Gamechanger" aircraft this month
The 50 most iconic songs of all time* have been revealed
International travel won't resume until August "at the earliest", says Leo Varadkar
QUIZ: Is your General Knowledge up to scratch?
The JOE Friday Pub Quiz: Week 243
You may also like
1 month ago
Here's the lineup for this week's episode of The Late Late Show
6 months ago
Shane Ross apologises for describing Enda Kenny as “a political corpse”
1 year ago
Enda Kenny has missed 96% of Dáil votes since stepping down as Taoiseach
1 year ago
Enda Kenny and Bear Grylls join forces for victory at inaugural yachting regatta
2 years ago
PIC: Enda Kenny is now rocking a scruffy beard and it's quite something
3 years ago
Enda Kenny to retire from Dáil at the next election
Next Page