Though both the complainant and the hotel's Facebook have since deleted any trace of their interaction, the original complaint and its subsequent response have been screengrabbed and can thus be shared with you this morning.

The original complaint came from a fiancée who planned to go on "every radio station" and have her partner and his stag party's attendees share their stories after their stay at Treacys Hotel Waterford led to their deposits being withheld the following morning. Here's how she eloquently put it:

"My partner of 10 yrs had his stag do in waterford last nite at dis hotel 17 men went dwn 1,120€ which was paid b4 arrival...wen d arrived ystrdy dis hotel asked dem 2 pay anoda 50e 4 a overnite deposit which d were guarnteed 2 gt bk nxt morn...d didnt gt netin dat was ment to b include in dere package...no finger food no round of shots no breakfast no deposit bk i think dis hotel was trying to earn some easy cash ,im going ta go on evry radio station nd get all dem boys to gv dere comment nd let evry tourist i know from my job all about dis sceeming hotel ...700€ is alot of money 2day smalls claim court i think...."

And in case you need an English translation of that message, here's one from Brummytom of Boards.ie:

"My partner of 10 years had his stag do in Waterford last night, at this hotel. 17 men went, paying €1,120 before arrival. When they arrived, the hotel asked them to pay another €50 as an overnight deposit which they were guaranteed to get back the next morning. They didn't get anything that was meant to be included in their package...no finger food, no round of shots, no breakfast, no deposit back. I think this hotel was trying to earn some easy cash - I'm going to go on every radio station and get all of the attendees of the stag do to share their stories, and inform every tourist I know from my job about this scheming hotel ...€700 is alot of money today. Small claims court I think..."

Having somehow made their way through the original post without scalding their eyes, Treacys replied in a very polite fashion, mentioning that they would not divulge the full details of the night publicly.

"I would not like to disgrace people on the internet so if you could so kindly send me your phone number in a private email I will let you know the facts of the night," wrote a poster from Treacys. "Then I am sure you will remove these comments".

With seemingly no reply forthcoming, Treacys decided that they could no longer allow their name to be dragged through the mud and went public with the full reasons why no deposit was given back - namely, a "lady" being brought back to the hotel room, a smoke alarm being set off at 1am, noise complaints at 5am, the removal of the "lady" at 6.30am and lastly, an incident whereby a "member of the party jumped the reception counter to physically hurt a member of staff."

Gardai were called twice during the night and as Treacys mentioned to put a final, emphatic stamp on the events to the complainant, "We have footage of all the night's events." Take a look at the full interaction between the two below: 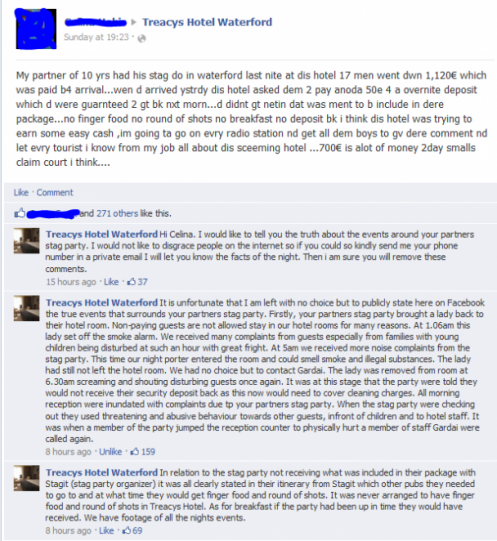 The humiliating smackdown from Treacys has gone viral in just a few hours and has already received the Epic News Daily treatment, below:

The Big Reviewski || JOE · Colm Meaney & his Pixie co-stars on deadly gangster priests, Irish accents & pickled onion crisps
popular
Sale of luxury castle in Kerry, described as "one of Ireland’s best kept secrets”, completed for €4.5 million
Actor Ellen Page comes out as transgender, changes their name to Elliot
Pfizer/BioNTech Covid-19 vaccine to be rolled out in UK next week after government approval
What the hell is 'Stomp and Holler', and why does Spotify insist that you love it?
Weather advisory issued for all of Ireland, with snow on the cards
Over 300 Ford cars recalled in Ireland over battery issue that could lead to vehicle fire
We're sorry, but a new clip from Wild Mountain Thyme is on the loose
You may also like
4 years ago
This new app will help you keep track of the Luas strikes
4 years ago
TWEETS: Mixed reaction as Joan Burton steps down as leader of the Labour party
4 years ago
VIDEO: All the thrills and spills from the AIB Start-up Academy Final
4 years ago
Which one of our finalists is going to be our AIB Start-up Academy Final winner?
4 years ago
JOE speaks to AIB Start-up Academy finalist Martin O'Connell from Nasal Medical
4 years ago
Snapchat's latest filter has been described as "offensive", "racist" and done in "poor taste"
Next Page