As much as JOE has loved this World Cup, there is no denying that it's much better when your own team are involved. That's why we have decided to take a look at some of the lessons that Martin O'Neill will have learned watching the World Cup in Brazil.

1 and 2) Playing Style and Fitness

JOE has decided to include both of these under the same heading because it seems impossible to separate them. It may seem like a trivial point to make, but fitness is absolutely vital at the elite level of international football. While previous generations may have relied on just being able to get 'up and down the park' this World Cup , and the Champions League successes of Real Madrid and Bayern Munich, has proven that pace is key.

Football styles always go in cycles. 2006 was Catenaccio while 2010 was the era of tiki-taka, but the majority of successful teams in 2014 have used at least two pacey wide-attackers. Recent criticism of Barcelona and Spain has accused them of having 'pondorous possession' which seems fair at times. Having the ball can sometimes become obsolete when facing a defensively rigid team with a quick counter-attacking outlet. Right now, Ireland will never dominate teams in terms of possession but there is more than one way to win a game of football. 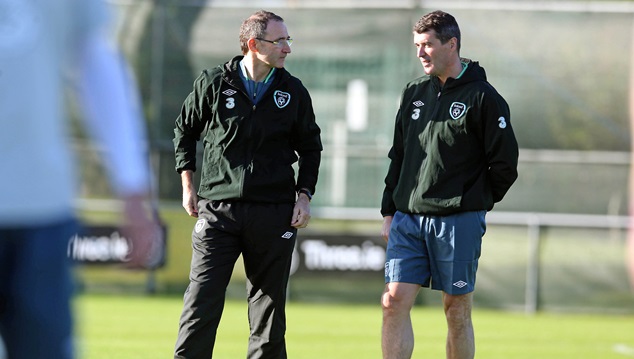 Turnovers and transitions, championed by the high pressing tactics of Borussia Dortmund and Chile, have become key in the modern era because a team is always most vulnerable whenever they lose the ball and subsequently their shape. Jurgen Klopp's Gegenpressing style, which Chile demonstrated to perfect effect in their 2-0 win against Spain, could be a template that Ireland should look to adopt. Essentially, gegenpressing is a simple tactical approach that requires discipline and fitness. The core idea is that a team will play at full pace for 90 minutes, approaching every moment as though they are a goal down in a final with five minutes left.

After losing possession, players swarm their opponents, giving them no time on the ball regardless of position, location or the opponents stature. This tactic doesn't require expert technical skills or the ability to spray 50-yard passes, all it needs its fitness, hunger, fitness, hunger and a small bit of nous to exploit any advantage. This is how Chile shaped up against the Spanish. 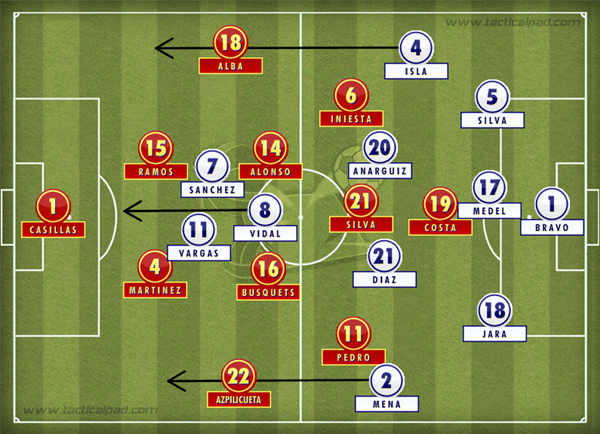 JOE has always felt that Ireland perform best when they don't give a damn about the reputation of the other team. We will never match the technical expertise of Spain or Brazil but there is no excuse for not matching or bettering their desire, passion and hunger to chase the ball down.

Fitness is key to this but the majority of Ireland's players are playing at a Premier League / Championship standard which is the same level as 2/3 of Chile's team. Granted we don't have an Alexis, Vidal or Vargas but the principle remains solid. JOE felt that Martin O'Neill's best performance to date as Ireland manager was the 0-0 draw against Italy where our middle two of Jeff Hendrick and David Meyler hassled and harried Verratti and Marchisio. 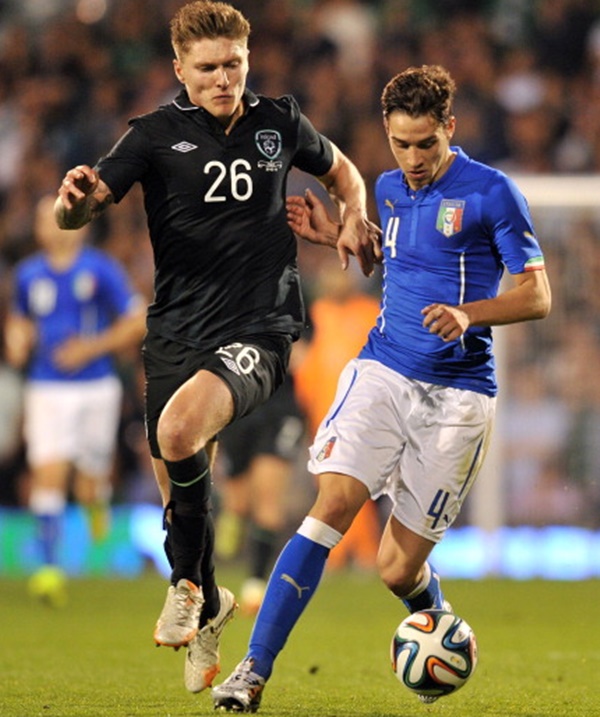 Compare this to how limply an understrength Ireland played against Portugal and Turkey when they seemed reluctant to close down players and were easily out-manoeuvred. Good players with time and space on the ball can murder teams.  This is why we feel that Ireland need to up their intensity levels and maybe look adopting some of the tactical trends used in Brazil 2014.

Right now, Ireland may not be able to produce footballers that are as gifted technically as Spain or Brazil, but the bare minimum we should demand is a squad full of players that can clock up the miles on the pitch. This transition from defence to attack can only be effective if the counter-attacking side has an outlet that can stretch the opposition. Teams are more than happy to give up possession of the ball because they know that a breakaway goal is more likely than an intricate 25-pass move. Chile have Alexis and Vargas, Bayern use Ribery and Robben while Real are devastating with Ronaldo and Bale.

McClean, Hoolahan or McGeady definitely don't match the talent of these players but they do offer a pacey counter attacking option with the ever willing Shane Long upfront. 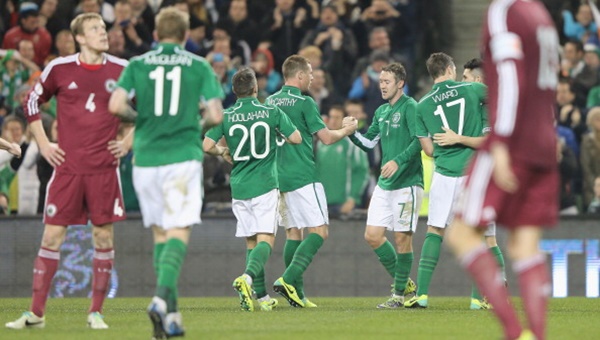 As long as JOE can remember, Ireland have always deployed a back four in international football. The benefits are easy to see and it has been good to us in the past. However, a common denominator in the successes of some of the smaller countries in this World Cup like Costa Rica and Mexico has been their use of a back five and the re-introduction of wing-backs.

Pragmatism must weigh heavier than idealism. Ireland do have some players that are decent on the ball however the system and shape must come first. There is no point trying to be open against Germany or Poland during the Euro 2016 campaign if it means we will be picked off. This system requires pace and technique on the ball in the wide areas, which is something that Seamus Coleman and Marc Wilson possess.

So far, O'Neill has favoured a variation of 4-2-3-1 and 4-3-3, which is something that JOE is happy to see however there are other variations available. Atletico Madrid showed that the traditional 4-4-2 isn't completely dead although it requires the following nuances.

For example, in this system wingers are required to 1) Essentially double up as central midfielders without possession 2) Work their asses off. 3) A deep lying No 10 is essential, Wes Hoolahan springs to mind, as the link man and 4) The centre forward will need to be decent holding the ball up and be prepared to close down defenders relentlessly, something Shane Long does quite well.

Whatever system O'Neill settles on it's vital that Ireland do have a Plan B. Arguably the biggest criticisms of the Trap era was that the team had become predictable and stale. The World Cup has shown that there is possibilities to frustrate and topple some of the bigger countries and their established tactical approach. 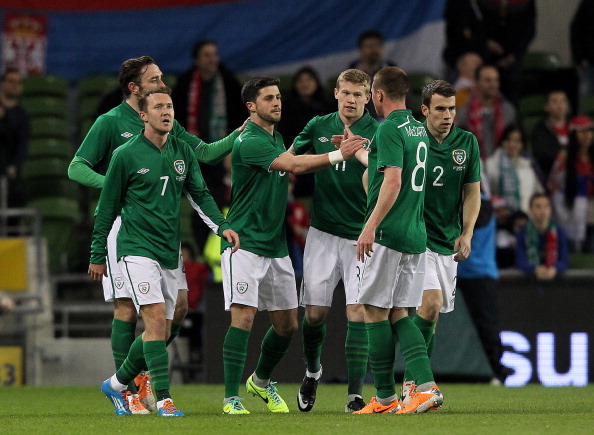 The average age of all the teams in Brazil is 26.8 and three of the youngest squads progressed to the round of 16. The average age of Belgium is 25.2, Nigeria 25.3 and Switzerland 25.6. A talented Swiss team brought Messi, Aguero and Di Maria to the brink of penalties and possible elimination.

JOE would never say that we should line up against Germany with a team of teenagers but there is a case to be made for giving younger legs a more prominent role, especially when considering the previous points about fitness. Experience does play a role in international football but JOE thinks that it is quite telling that the squads with the most caps in Brazil, Spain and Uruguay, were arguably two of the most disappointing, stale and predictable.

Of course, O'Neill can't just go and magically find a Marco Reus or James Rodriguez but we would like to see some of Ireland's younger players being given more importance in the national set-up. To his credit, O'Neill does seem to have faith in the next generation with Hendrick, Coleman, Clark, Brady and Duffy all featuring so far. Injuries hampered his chances to have a look at  new players and formations during the recent end-of-season friendlies but JOE feels that there is more room to experiment. 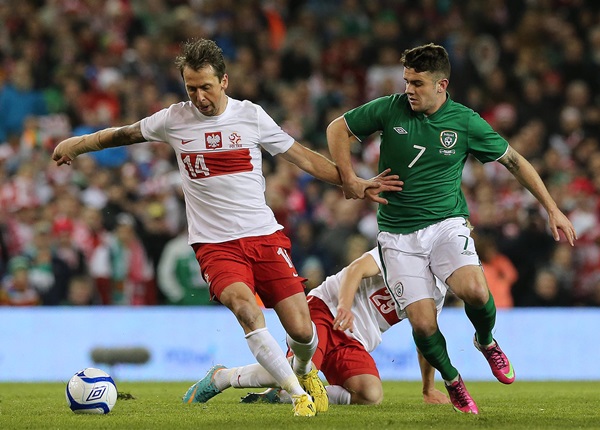 This one is out of O'Neill's hands, however, the Irish players will need to evaluate their club futures.  Right now, Ireland's players won't be lining up to play in the Champions League or playing in top of the table clashes next season but that shouldn't hinder the national teams chances of reaching Euro 2016. The likelihood is that Ireland's squad for the Euro qualifiers will be a mix of honest and committed players along with a small helping of genuine match winning talent. O'Neill simply has to find a winning combination.

As we all know, the reputation of a players club doesn't always equate to a good/bad performance for their country. Only eight of Mexico's World Cup squad play outside their domestic league, nine of the US squad ply their trade in MLS and the same goes for Costa Rica and their domestic league. JOE isn't advocating a mass exodus of English-based Irish players to the League of Ireland, but you can't deny that some of the Irish squad would help their international careers by moving club in the hope of more game time.

JOE understands that players will always want to play at the highest level/wages possible but it we're sure that O'Neill would love to choose from a squad that are all starters for their club, regardless of the level. This summer transfer window is a vital one for the national team. Wes Hoolahan, Kevin Doyle, Anthony Pilkington, Keiren Westwood and Sean St Ledger will all need to have their futures sorted. We're a firm believer in playing players that are in form over those with reputations.

Will JOE be watching the Boys in Green from Paris in two years time or will we be cheering on another country from our couches? Time will tell. COYBIG!

popular
The JOE Friday Pub Quiz: Week 210
Over 6,000 items seized by Gardai in five counties in operation targeting illicit television products
QUIZ: If you can get 18/21 on this Scrubs quiz, you're a qualified doctor
QUIZ: How well do you remember the Who Shot Mr. Burns episodes of The Simpsons
The new voice actor for Carl on The Simpsons has been announced
Ireland’s travel Green List to be reduced to four countries after four countries removed
The Hardest Star Wars Quiz You Will Ever Take
You may also like
10 months ago
COMPETITION: Win four tickets to Republic of Ireland v Denmark
1 year ago
“Shane Duffy is right now everything for Ireland. His defence keeps us in it & when Denmark score, who steps up?”
1 year ago
Read John Delaney's full opening statement to Oireachtas Committee
1 year ago
The Football Spin on change at the FAI, Declan Rice's smart move and why Ireland fans should be angry
1 year ago
The Football Spin Heartbreak Valentine's Day Declan Rice Special
1 year ago
"You cheeky bollocks!" - The key takeaways from Mick McCarthy's first press conference as Ireland manager
Next Page