Have you seen Fionn the Irish terrier, the new GAA mascot?

Yesterday was a truly remarkable occasion at Croke Park. Yes, the game between Dublin and Kerry was a cracker, but we also saw the new GAA mascot.

The opening half was breath-taking stuff from both sides and if supporters thought that the interval was going to be some kind of breather from all the action, they thought wrong, as Fionn the Irish terrier was unveiled to the crowd.

A direct descendant of the Irish Wolfhound, Fionn originally came from the hills between Newry and Dundalk in an area known as the ‘Land of Legends’ and his hobbies include Gaelic Football, Hurling, Rounders and Handball. So he comes from good stock. 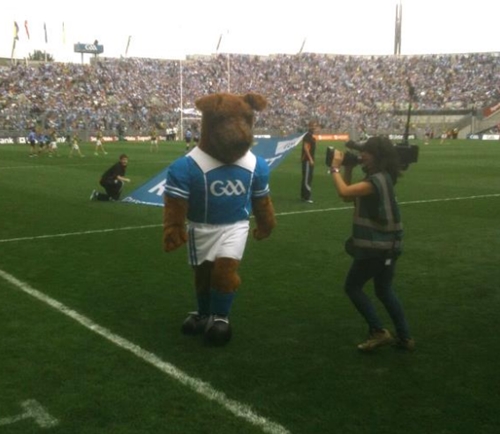 Fionn is the result of an online competition held by the GAA, with the winning entry inspired by siblings Devin (11) and Saoirse McLoughlin (8) from Ardagh in Co. Longford, who were both in Croker yesterday with their mam and dad to see their design come to life.

Fionn’s job is to “communicate the GAA ethos and key messages to our members and supporters”, which sounds more like a role for somebody in a suit rather than a walking, six-foot terrier, but maybe we are underestimating Fionn.

We wish him all the best in his new role.

House of Rugby Ireland · Murray & Sexton debate, France's Covid hell and James Tracy interview
popular
The JOE Friday Pub Quiz: Week 232
Irish cinema named one of the 50 most beautiful cinemas in the world
Scarlett Moffatt discovers ‘30% rain’ on weather app doesn’t mean chance of rain
QUIZ: Can you name all of these characters from The Rugrats?
These are the free subscription games coming to PlayStation and Xbox in March
QUIZ: Can you identify these world cities on a map?
Gardai prepare for massive crowd at Dublin protest march
You may also like
4 months ago
Post-match celebrations and a lack of social distancing at certain events put club game on hold
4 months ago
Cork GAA pleads with clubs and supporters “not to engage in celebrations that breach current guidelines”
8 months ago
What's the Bronco test and why it may come up in conversation this week
10 months ago
The Andy Moran GAA Isolation Workout
10 months ago
SuperValu, Centra and the GAA team up on initiative to support elderly people
11 months ago
Meath GAA club confirm adult player has tested positive for coronavirus
Next Page