How Farnborough Town's squad will contain Messi, Maradona and Pele

With transfer speculation reaching fever pitch ahead of the start of the season, non-league Farnborough Town's squad will contain some heavy hitters, with Messi, Pele and Maradona on the books.

And there is a perfectly good reason why such illustrious names would be plying their trade in the lower echelons of English football. And the reason is Paddy Power.

The Irish bookmaker has signed a sponsorship deal with the club in the sixth tier of English football. The deal rescues a club that went into administration last April, and Paddy being Paddy, decided to have a complete overhaul. So the ground has been renamed, the kit has been updated, while their playing squad and manager have changed their names to some of the biggest names in football.

Manager Spencer Day has become Jose Mourinho, while players such as Alan Inns, Matt Ball and Dave Tarpey have swapped monikers by deed poll with greats who played in their respective positions, from Franz Beckenbauer to Paul Gascoigne. 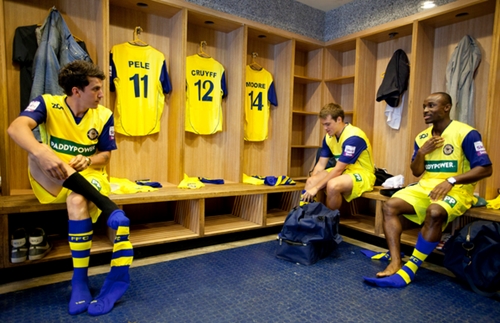 “The end result is that, on paper, the Skrill South team will be without doubt the best combination of playing talent that has ever been assembled,” a Farnborough press release boasted.

So forget about the Nou Camp, Old Trafford, the Bernabeu or the Allianz Arena, if you want to see some of the biggest names in the game, Paddy Power Park is the place to be this season.

The Big Reviewski || JOE · The Big Reviewski with Y: The Last Man, that Malignant ending & a secret streaming service
popular
You could be shopping in an Aldi store with no checkouts in Ireland in the near future
Cash, Rolexes, cars and one Canada Goose jacket seized in major Garda raid
Government announces special €1,860 payment for laid-off workers during pandemic
Man (40s) in critical condition following serious road collision in Cork
New special payment for workers laid off during pandemic - Who is eligible and what are they entitled to?
QUIZ: Can you 100% this tricky Oasis quiz in just three minutes?
Men arrested trying to cross New Zealand border with boot full of KFC
You may also like
11 months ago
Arsene Wenger tells Graham Norton about his infamous fight with José Mourinho
11 months ago
Netflix has just released a must watch Jose Mourinho documentary
11 months ago
The 6 best things to watch on Netflix this weekend
2 years ago
José Mourinho accepts one-year suspended prison sentence in Spain
2 years ago
WATCH: José Mourinho reveals how he uses press conferences to convey hidden messages
2 years ago
It looks like Manchester United accidentally revealed Ole Gunnar Solskjaer as their new interim manager
Next Page