We had a hunch – call it Daniel Levy intuition – that Gareth Bale’s transfer to Real Madrid might go to the last day of the transfer deadline, though it seems Madrid themselves did not.

The world record transfer fee looks set to be broken tomorrow, though they couldn’t have been too much longer crossing the t’s and dotting the i’s at this stage.

Of course no club does glitzy player presentations to their supporters quite like the Spanish giants so a stage was erected in the Bernabeu to showcase the Welshman to the adorning public.

The only problem is that Levy is making Madrid work for it and the club has the little matter of a league game against Athletic Bilbao to take care of, so it has to be taken down, before being put back up after the match ahead of Bale’s expected arrival and presentation tomorrow. 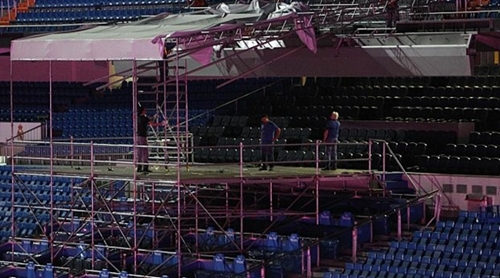 The Gareth Bale transfer saga, all in its own good time.

popular
Nicola Bulley's phone found by the river 'could be a decoy', diving expert suggests
Teenager killed in shark attack after swimming with dolphins in Australia
The Last Of Us Episode Five will premiere days earlier in Ireland and UK
Amazon Prime Video has just added 21 big movies to its library
5 years ago, Hollywood took a massive gamble on a huge sequel... and lost big time
Shock as blues singer beats Adele, Beyonce and Taylor Swift to win Song of the Year Grammy
Ben Affleck's bored expression at the Grammys becomes a meme
You may also like
8 months ago
Merseyside police defend ‘exemplary’ Liverpool fans tear gassed by French police
3 years ago
QUIZ: How well do you remember Zinedine Zidane's playing career?
4 years ago
Mesut Özil hits out at "right-wing propaganda" in Germany following criticism for meeting Turkish President
4 years ago
Cristiano Ronaldo proves why he’s one of the greatest with late free-kick equaliser
4 years ago
Liverpool goalkeeper Loris Karius writes emotional apology to fans
4 years ago
Gary Neville has really twisted the knife into Liverpool's Champions League defeat
Next Page