James McCarthy's ongoing growth as a midfielder of real substance, Stephen Kelly's return and the role of Wes Hoolahan are three things we'll be looking out for in the big one at Wembley tonight.

The continuing blossoming of James McCarthy

Whatever your opinion of Giovanni Trapattoni, there was at least some grain of truth to recent comments he made about James McCarthy and the reluctance he sometimes shows to impose his will on the game in the manner we all know he can.

"James has the good qualities but I have told him, 'I will punch you if you don't stop being shy'”, Trapattoni said earlier this year and this was after we had begun to see the best of McCarthy in a green jersey, particularly away to Sweden in a game he wasn’t even supposed to start in the first place.

In McCarthy’s defence, he’s still only 22 and at international level at least, not only was he limited to a large degree by Trap’s tactics and the demands he makes of his central midfielders, he was trying to establish himself in a position that has been dominated by two players for the majority of the Trapattoni era.

Since Trap made those comments, McCarthy has been one of the standout midfielders in the Premier League, so much so that he is expected to be snapped up by a club in the upper echelons of the league after showing, not least in the FA Cup Final, that he has the ability to become a midfielder of real stature and hold his own alongside the best in the business.

All of that bodes well from an Irish perspective and if all goes to plan in the next decade or so, McCarthy could develop into our most prominent midfielder since, whisper it, Roy Keane.

If the motivation of playing England tonight wasn’t enough, McCarthy will probably know that he’s going to be watched closely by those coveting his signature and hopefully that inspires him to another outstanding performance at Wembley only weeks after his starring role in Wigan’s famous FA Cup success.

Re-baptism of fire for Kelly

It would be hard to find an Irish fan who isn’t pleased by Stephen Kelly’s return to the Irish fold.

From everything that emerged from his ugly fall-out with Trapattoni, it appears as if he was hardly to blame, he seems to be a very popular member of the squad and though he was never a guaranteed starter in the Irish XI, he nearly always did a job when he came in and could cover a number of positions. 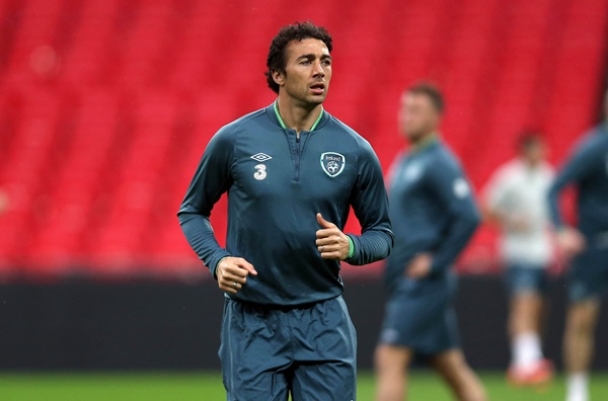 As long as he's not burned after Reading's season, it's a big opportunity for Stephen Kelly tonight

This evening’s game is only a friendly after all but it looks as if Kelly will have a job on his hands at Wembley this evening with Arsenal duo Theo Walcott and Alex Oxlade-Chamberlain pencilled in to start on the flanks. If that does prove to be the case they’ll probably switch sides at will and the Wembley surface is big enough to expose full-backs if, for example, Kelly is not protected by Aiden McGeady or Jonathan Walters ahead of him.

As an experienced Premier League defender, Kelly is used to facing players of the calibre of the Arsenal duo and if he can put in a good showing this evening, Marc Wilson might have a fight on his hands for the left-back berth a little bit down the tracks.

When will we see Wessi?

While it was great to see Robbie Keane show such desire to play in a game that really is more than friendly, the chances of Wes Hoolahan featuring from the start certainly would have increased had he not been given permission by the LA Galaxy to come over.

And if Trap is not prepared to start a man who offers an alternative to Ireland’s rigid and often one-dimensional approach in a friendly, then when will he be?

In his all-too-brief appearances in a green jersey to date, the Norwich midfielder has been a breath of fresh air, showing a willingness to get into positions that opposition defenders are uncomfortable with and an ability to create opportunities when he’s in there.

Ireland’s determination to win tonight’s game might mean that substitutions aren’t as frequent as they normally would be in a friendly but hopefully Trap will see fit to unleash our own little left-footed maestro at some time and give the sizeable Irish contingent at Wembley something to get excited about.

popular
Fish and chips could be removed from Irish menus over rising fuel costs
Netflix has just added 33 very big movies to its library
Increase in passenger charges at Dublin Airport may be on the way
The full list of cancelled flights in and out of Dublin Airport on Monday (so far)
The long-awaited MetroLink is finally happening, for real this time, honest
Jordan Peterson suspended from Twitter over Elliot Page comment, says he won't apologise
Government considering giving public €200 again to assist with rising energy costs
You may also like
2 years ago
"I’d rather have a couple of mates than a couple of medals" - Jason McAteer responds to Roy Keane comments
3 years ago
There was a huge reaction to Jonathan Walters' emotional interview on The Late Late Show
3 years ago
Jon Walters shares his colonoscopy experience in attempt to raise awareness of bowel cancer
3 years ago
Jon Walters issues statement on departure of Martin O'Neill
3 years ago
Jon Walters all but confirms the Stephen Ward Whatsapp story
5 years ago
WATCH: Jon Walters belter opens the scoring against Uruguay
Next Page