There would appear to be about as much enthusiasm for this game as there are for Christmas ads in August, but there are still a few things to get excited about at the Aviva Stadium tonight.

Has Trap fallen on his most exciting team selection by default?

The starting XI named by Giovanni Trapattoni tonight would never have been selected had a number of regulars not been missing and those eleven players will probably never share the same pitch after tonight, but whether by default or not, it’s still a pretty exciting line-up.

As much as many of us wanted to see it, not many Irish fans would have ever envisioned an Irish team with Seamus Coleman, Ciaran Clark, James McCarthy, James McClean, Robbie Brady and Shane Long all given an opportunity to impress.

Given his recent outstanding form for Norwich, it would have been nice to see Wes Hoolahan on from the start as well, but at least he’s been promised 45 minutes and besides, if he had started, chances are we wouldn’t have been able to have a few minutes of fun working out all the potential possibilities for the Long-Cox partnership (Will it be penetrative? Will Cox drop into the hole? etc, etc.)

The names mentioned above are the players that are likely to provide the fulcrum of Irish teams in the not too distant future and hopefully that is realised sooner rather than later, whether by Trapattoni himself or whoever should succeed him if he doesn’t last until the end of the current qualifying campaign.

Hopefully, their audition for more permanent starting berths will be an impressive one tonight.

Shane starting up front has been a Long time coming

OK, so Shane Long did lead the line against Oman in Craven Cottage back in September, but nobody should really read into the significance of that result, particularly after we were on the end of a 6-1 thrashing in the following game.

The Baggies’ striker’s next two appearances in a green jersey were small cameos against Germany and the Faroe Islands – both of which came when the games were already over – and had Robbie Keane been around for tonight’s game and Jonathan Walters not cried off, there is a good chance Long would be on the bench once more tonight, with Trap seemingly still holding a grudge over their mix-up in communication earlier in the year. 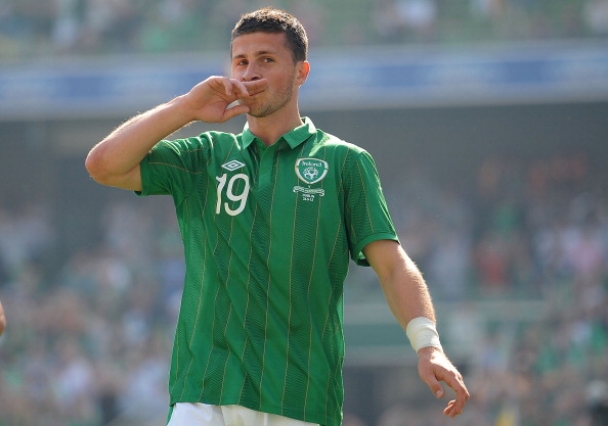 Regardless of who was in or out of the squad, however, Shane Long HAD to start tonight, as nobody in their right mind could ignore the form he’s been showing for West Brom so far this season. The Tipp man has always been known as a scorer of goals, but he’s also claimed four assists in the Premier League this season – including a magnificent cross for Peter Odemwingie’s goal against Southampton recently – evidence that he is developing into more of an all-round front man.

We’re not the only ones who have been impressed by the Tipp native either. Gary Neville recently spoke at length on Sky Sports about the impact Long has made so far in this campaign and if he can build on that tonight, then maybe he can make the green number nine shirt his own for whatever’s left of the road to Brazil.

A chance for McClean to get back on track

It’s been a tough few months for James McClean. The Derryman is suffering a little bit from the inevitable second season syndrome in a Sunderland side that are probably the most boring in the Premier League, while the attention he received for the ill-advised tweet and the (completely overblown – McClean did nothing wrong) poppy furore at the weekend probably didn’t do him any good either.

As well as that, he appears to have slipped behind Robbie Brady in the pecking order at international level and has certainly never received the same glowing praise that Trap dished out in the direction of the Manchester United man this week.

Still, it was only a few months ago that McClean was the next big thing from an Irish perspective and he hasn’t become a bad player overnight.

His last proper opportunity for Ireland (discounting a brief cameo in the Oman game) was as part of a malfunctioning three-man midfield experiment in Belgrade, but tonight he’ll have the opportunity to do what he does best, to be direct, to run at the opposition full-back and to send in good deliveries to the box, where an in-form Shane Long will be lying in wait.

It’s a big night for plenty of Irish players on show tonight, but for McClean maybe more than most.

popular
Infant dies after being hit by jeep in Roscommon
The JOE Friday Pub Quiz: Week 308
Pilots fly over destination airport at 37,000 feet because they were both sleeping
Two Irish people arrested in "smuggling event" near Miami
Netflix has just added 23 very big movies to its library
Multiple fatalities after planes collide mid-air over California airport
Passenger plane dropped 1,200 feet in a minute without pilots noticing
You may also like
2 years ago
"I’d rather have a couple of mates than a couple of medals" - Jason McAteer responds to Roy Keane comments
3 years ago
There was a huge reaction to Jonathan Walters' emotional interview on The Late Late Show
3 years ago
Jon Walters shares his colonoscopy experience in attempt to raise awareness of bowel cancer
3 years ago
Jon Walters issues statement on departure of Martin O'Neill
3 years ago
Jon Walters all but confirms the Stephen Ward Whatsapp story
5 years ago
WATCH: Jon Walters belter opens the scoring against Uruguay
Next Page