When Liverpool paid £35m for the talented but clearly overpriced Andy Carroll, we were shocked. When we saw his Glastonbury get-up, however, we fell off our seats.

Let’s be honest, the former Newcastle target man is a confusing guy.

Whether he’s palling up with club rival star Wayne Rooney (same music festival last weekend, same holiday resort the week before), or dragging boss Kenny Dalglish to a Boyzone concert, we really don’t know what to make of the 21-year-old.

The Boyzone concert was especially puzzling to us, particularly when King Kenny later refused allegations concerning the player’s drinking habits by telling reporters: “I’ve been with him at Boyzone concerts and he’s still never bought me a drink!” Wait a second… how many concerts and which poor soul is forcing the other to attend?

Carroll’s, shall we say ‘unique’ ensemble at last weekend’s Glastonbury Festival confirmed a notion that we at JOE had held for quite some time – the guy is stark raving mad.

Where do we begin with this outfit, aside from this the obvious question - it’s a joke, right? There is no way a mega-earning Liverpool star actually thinks that they look good. It's the kind of outfit that former Red Andriy Voronin and his missus would probably baulk at, or perhaps only wear once. 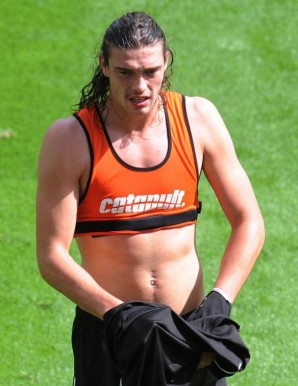 Here, for reasons known only to himself, is Andy in an orange man-bra

That was our opinion before we were kindly informed of the existence of Carroll's man-bra, pictured above. So perhaps the player actually thinks he looks the business.

So let’s start with the hat. It’s not a very nice hat, is it? Adorned with beads and displaying a thin brim, it’s at least less noticeable considering the record signing has teamed his hat with a sky blue old lady head scarf. Again, this makes absolutely no sense.

Carroll’s headwear is then topped off with a vomit-inducing purple rain jacket, red hoodie, tight ¾ length jeans (thankfully out of shot) and manly black wellies.

Considering how notoriously press-shy footballers can be, we're doomed to never truly finding out what was going on with this outfit, the man-bra and frequent trips to see Ronan Keating singing 'Shhhorrrry..." amid a sea of barren-wombed, cat-loving middle-aged women. Fashion victim or fashion enigma? We'll probably never know for sure.

The Big Reviewski || JOE · M. Night Shyamalan, Alex Wolff & Thomasin McKenzie talk about their new creepy thriller Old
popular
Dublin pub hit with 'about 50 or 60' fake bookings on first day of indoor service
Met Éireann forecasts "heavy blustery showers" for this week
QUIZ: How many of these famous erect landmarks can you recognise?
QUIZ: Can you get 10/10 in this quick County Cork quiz?
Leo Varadkar confirms Ireland to overtake UK's vaccination rate in "next week or so"
Only Murders in the Building is a must-watch for fans of true crime podcasts
The 50 most iconic songs of all time* have been revealed
You may also like
5 years ago
JOE BUSINESS: 3 great reasons you should pop-up in Dun Laoghaire this summer
5 years ago
This new app will help you keep track of the Luas strikes
5 years ago
TWEETS: Mixed reaction as Joan Burton steps down as leader of the Labour party
5 years ago
VIDEO: All the thrills and spills from the AIB Start-up Academy Final
5 years ago
Which one of our finalists is going to be our AIB Start-up Academy Final winner?
5 years ago
JOE speaks to AIB Start-up Academy finalist Martin O'Connell from Nasal Medical
Next Page